Anonymous Cowboys players are calling out the coaching staff for being “totally unprepared," according to an NFL Network report.

Despite catastrophic injuries to a spotty defense, the Cowboys (2-4) still find themselves atop the NFC East. But after a 38-10 blowout loss to the Arizona Cardinals on Monday Night Football, it appears not all is well in Dallas.

Anonymous Cowboys players are calling out the coaching staff for being “totally unprepared," according to a report from NFL Network’s Jane Slater on Tuesday.

#Cowboys players initially bought into keeping things internal. Now as they sit 2-4 the discontent is leaking out. On the coaching staff “totally unprepared. They don’t teach. They don’t have any sense of adjusting on the fly.” Another “they just aren’t good at their jobs”

McCarthy addressed the report during his media availability later Tuesday.

“I think you have to recognize it. I really go back to my first meeting with the football team,” McCarthy said. “I’ve always stated this to every team I’ve coached. I think it’s important to handle things as men. I mean, if you do have something to say publicly, I think it’s important to say to the individual, particularly in a group dynamic setting, especially in the game of football, especially the Dallas Cowboys."

Since joining the Cowboys this offseason, things have certainly gotten off to a rocky start, even before the start of the season.

McCarthy and his staff had the task of implementing a new system with players during an offseason in which players and coaches couldn’t see each other in person for much of the time because of the coronavirus pandemic.

Then during the season, McCarthy has dealt with a bevy of injuries which has left him without star quarterback Dak Prescott, tight end Blake Jarwin, offensive linemen La’el Collins and Tyron Smith for the rest of the season.

Over the next two weeks with matchups against NFC East rivals Washington and Philadelphia, SportsDay’s David Moore writes that McCarthy’s credibility as a coach is at stake.

“McCarthy’s initial season with the franchise will be defined by what happens in the next two weeks. The head coach’s credibility and the team’s competitive viability are at stake,” Moore writes. "Win back-to-back division games on the road and the panic abates. Beat Washington and Philadelphia and the mudslide stops. Order is restored to the NFC East.

"Lose both and flashbacks to 2015 are unavoidable. Nothing will stand between the Cowboys and their descent to 4-12 or 5-11.

“Anonymous quotes will continue to seep out of the locker room by players questioning the coaching staff’s competence to diffuse criticism of their own culpability.”

However, Cowboys owner and general manager Jerry Jones showed support for McCarthy during an interview on 105.3 The Fan [KRLD-FM] Tuesday.

“What we don’t have to worry about — is he capable of coaching a team to the ultimate? And he very much is,” Jones said. “He’s outstanding, to say the least, with his experience. He has great, and I mean great, football fundamental basics. With that, you build on that.” 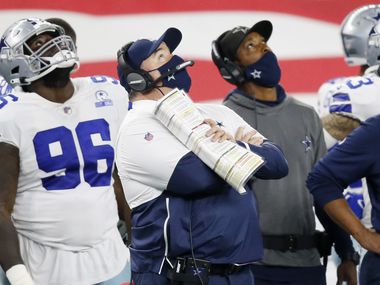 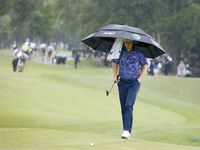 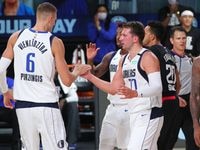