The Cowboys’ chances against the Vikings are tied to the QB position, and we don’t just mean Andy Dalton

Minnesota is thinking it has played its way back into contention. So, the pressure returns to Kirk Cousins.

It seems a fool’s mission, picking the Cowboys to win in Minnesota as I continue my long climb out of an early season prognostication slump in The News’ weekly NFL picks. But I’m here to tell you why it is not.

The Vikings own the second-longest win streak in the NFC, which is, on the one hand, a modest three games but, on the other, something Dallas hasn’t managed since the first three weeks of 2019 when that New York-Washington-Miami tiptoe into the schedule had Cowboys fans making postseason travel plans. Dallas is 7-15 since that glorious stretch and, of course, the final 2-7 portion of that reflects this year’s stumbles without Dak, Tyron, La’el and Co.

But one of the many weird things about the 2020 season is that the Cowboys, even in last place in what’s almost certain to finish as the worst division since the four-team format was adopted, are as close to the playoffs as the “hot” Vikings.

Minnesota is 4-5 after wins over all three NFC North foes. They remain three games behind Green Bay so a division title seems out of reach. They are 11/2 games behind Arizona for the third and final wild card, but with the Cards playing in the NFC’s best division, one can see how Minnesota maintains hopes of bridging that gap.

The Cowboys, despite that last-place standing, are similarly 11/2 games behind Philadelphia. The Eagles come to town in December so Dallas could make up a full game of the difference there. Somewhere along the way they probably need to pick up a win or two outside the division. Why not start that chase in Minnesota on Sunday afternoon?

The major reason I think Dallas has a chance is the quarterback position. And I don’t mean just Andy Dalton’s return to the Cowboys’ lineup from concussion and COVID protocols. His season is about as 2020 as it gets. Realistically, there was a great chance that after signing with Dallas, Dalton would really never be seen.

But this season has provided an unfortunate quarterback carousel in which we are already being exposed to Dalton 2.0. If he can get something close to adequate protection, then the Cowboys’ elite receiving corps could be recalled to life. A team that has averaged 10.25 points per game since Dak went out should get a boost. You may have one image of Vikings’ defense in your heads, but it’s not being carried out by a team that gave up 40 to Atlanta a month ago.

Then there is the matter of Kirk Cousins. Suddenly the Vikings are thinking they have played their way back into contention. Once again the pressure returns to Cousins, and how has he handled that so far in his career?

I’m not going to call him the Vikings’ version of Andy Dalton. His career stats are better across the board — not by much, a 96.9 passer rating to 87.1, a 5.1 touchdown pass percentage to Dalton’s 4.5, but the differences are there. If you move beyond passer rating, Dalton’s career record of seven games over .500 (70-63-2) is superior to Cousins’ modest 48-47-2. And Cousins has one playoff win to Dalton’s none, although Dalton got his team to the playoffs with greater frequency.

The point here is that Cousins has not performed in the way Minnesota hoped he would when it stacked $84 million in unmarked bills and delivered the package to Cousins’ house (I’m not sure that was the exact procedure, but the guaranteed amount is accurate) in 2018.

Vikings coach Mike Zimmer has done his best to make him an afterthought. Let running back Dalvin Cook win the games and keep Cousins under wraps. That is the weekly plan. Of all the nine-start quarterbacks, only Baker Mayfield has thrown fewer passes (by two), and the Browns were totally committed to the run even before losing Odell Beckham Jr.

Put is this way. Kirk Cousins has thrown 23 more passes than Dak Prescott in 2020. And the Cowboys have made four starting quarterback changes since Dak was carted off the field against New York.

If the Cowboys’ defensive tackles play as they did against Pittsburgh, keeping the Steelers in shock for four quarters as to why they couldn’t run the ball (backs had 15 carries for 30 yards), then they have a chance to keep Cook from destroying them. And that puts the game in Cousins’ hands.

Given his 2-6 career record against Dallas, that’s never a bad thing. 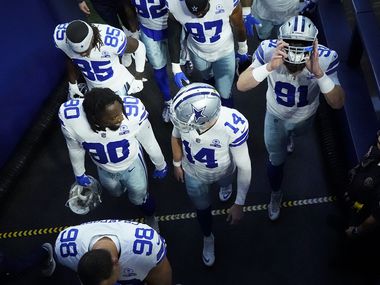 Can Cowboys bounce back from this disaster of a season? Only if they don’t screw up by winning now