The Cowboys’ decisions on defense the past decade mean they must absolutely get it right in the first round this year.

Dan Quinn’s résumé suggests he was a much better coach when he had Earl Thomas and Kam Chancellor and Richard Sherman to work with instead of those knuckleheads in Atlanta. Don’t get me wrong, good coaching is a rare and wonderful quality. But talent makes geniuses of us all.

And Quinn will find his new defense short on material unless the Cowboys reverse a decade-long trend, and quick.

Consider Jerry Jones’ draft history. Come on, open your eyes. This won’t hurt. Not much, anyway. Believe it or not, Jerry’s first-round record in the decade that just mercifully left us was the best of the last three. You could look it up.

In 1991-2000 and 2001-10, there were seven instances in each decade where the Cowboys either didn’t have a first-round choice or botched the pick. And the results followed suit.

But as good as they were overall in the first round the last 10 years, the best picks were all on offense, which might explain why Mike Nolan is now unemployed.

Basically, the Cowboys don’t have much to show for their top picks on defense in the last decade. Besides the Claiborne and Charlton busts, the Cowboys let Byron Jones go in free agency. All that’s left is Leighton Vander Esch, who, even when upright, seems stuck in reverse.

Imagine how much different the Cowboys would look if they’d had as much success with their first-round picks on defense.

T.J. Watt instead of Taco, anyone?

On the Cowboys’ roster as is, Quinn will find only one star: DeMarcus Lawrence, ranked fourth in the league among edge personnel by Pro Football Focus. According to PFF’s metrics, only Khalil Mack, T.J. Watt and Joey Bosa ranked higher in 2020.

Otherwise, the best Cowboy at any position on defense was Donovan Wilson, who came in 21st at safety. Wilson’s partner, Xavier Woods, finished 44th.

Aldon Smith apparently should have paced himself. His blistering start faded into a 52nd close among edge rushers. And those, friends, are the highlights.

As you’d expect, the findings for the Cowboys’ interior defensive line were pitiful. Like Dean Wormer reading Delta Tau Chi’s grades in Animal House. Congratulations, Antwaun Woods, you were the star of your little fraternity. Stumbling along behind his 85th-place finish was Tyrone Crawford (101) and Neville Gallimore (104).

If numbers make your eyes cross, try this perspective: Washington finished with three defensive tackles in the top 50. The Giants had three in the top 25.

Without question, a lot factored into the Cowboys’ next-to-last place finish in run defense. Gap integrity is important. Lining up, too. The Cowboys looked so lost under Nolan, even poor Sean Lee needed GPS.

But the Cowboys weren’t so good at stopping the run under Rod Marinelli, either. Remember the formula for Marinelli’s defensive line? Just give him guys with high motors. He’d been better off with a few Peterbilts. The Cowboys have historically spent little capital in the draft or free agency on interior defensive linemen. The last defensive tackle they drafted in the first round was Marcus Spears in 2005.

BTW: Don’t expect them to break the streak this year, either. There may not be a defensive tackle worth taking in the entire first round.

Compounding the problems on defense this season was the fact that the Cowboys were just as bad in the secondary. Trevon Diggs had a few hiccups in his rookie year at cornerback, but, as Mike McCarthy noted, he’s never seen a young corner better when the ball is in the air. Diggs came in 58th in PFF’s rankings. Anthony Brown was next at 86, followed by Chidobe Awuzie at 97 and Jourdan Lewis at 108.

Look, PFF’s grading system isn’t infallible. You can find some pretty good players with some curious grades. Then again, I don’t think we can argue with the Cowboys’ report card.

What it all means is that the Cowboys must stock up on defense in the draft. Diggs and Gallimore were a nice start last year, as was the development of Wilson, a sixth-rounder in ’19. The good news for the Cowboys is that the draft is top-heavy with offensive talent. Chances are good that the best defensive players available would fall into their lap with the 10th pick. Could be Alabama’s Patrick Surtain II, or Caleb Farley of Virginia Tech. Either would be a walk-in starter at cornerback.

The Cowboys will have to make some financial decisions, too. Dak Prescott’s new deal will eat up a large portion of the cap, meaning they won’t have a lot of money to spend on free agents, including their own. They might even consider something like making Jaylon Smith a June 1 cut.

Speaking of which, what if they’d given Byron Jones his money in 2019 instead of Jaylon?

Bottom line: The Cowboys’ decisions on defense the last decade means they must absolutely get it right in the first round this year, and if they do, they need to hold on to him. Dan Quinn’s future at the Star pretty much depends on it.

Correction: A previous version of this column misspelled the names of Earl Thomas and Patrick Surtain II. 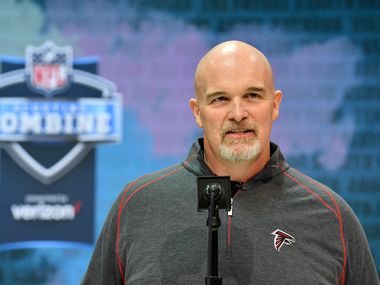 Film room: Why Cowboys’ defense under Dan Quinn will look different than ones coached by Kris Richard