OXNARD, Calif. — The Cowboys officially start training camp with Thursday’s practice and in addition to the fans and media members who will watch it, HBO’s Hard Knocks series is here with cameras in hotel meeting rooms, hotel rooms, on the practice fields and basically everywhere someone is walking associated with the Cowboys.

Mike McCarthy doesn’t want to give an opponent an edge by revealing anything. For example, he removed numbers from jerseys during a televised scrimmage last year and was hesitant to allow media members to tweet during practices this year. He had a frantic response when told HBO was coming to training camp.

“I am just going to be honest,” the Cowboys coach said Wednesday. “I almost wrecked my truck when Jerry [Jones] called me, driving through a rain storm. But I got it back in the road and I am all in.”

McCarthy doesn’t have the look of a person who wants HBO’s cameras visiting his football team. McCarthy, with deep Pittsburgh roots, is a meat and potatoes type of man.

During the opening news conference, Jerry Jones loaned his sunglasses to the head coach, because, well it’s Southern California.

“I think it’s important for all of us and that was the message after meeting with the [HBO] staff: Just be yourself,” McCarthy said. “Let them do their job and we are going to do ours. That was really my focus.

“I never put a lot of time and effort or really cared about what people think of me. That was why I was probably the only guy who walked in here without sunglasses.”

Jimmy Johnson and Ring of Honor

With Jimmy Johnson getting inducted into the Pro Football Hall of Fame next month, Jerry Jones was asked about whether the former Cowboys coach will get placed into the team’s Ring of Honor.

“I don’t want to do anything that takes away from this year,” Jerry Jones said. “He’ll have a year, provided everything goes good, he’ll have a year that we also honor his Hall of Fame and it will be this year.”

Mike McCarthy said Dak Prescott (ankle) will be a full participant in practices, starting this week. 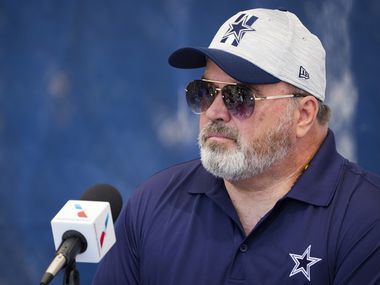 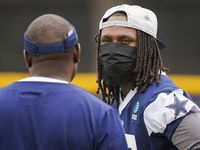