The NFC East is off and… Fly Eagles Flying? What Jalen Hurts’ hot start could mean for Cowboys

The Cowboys host the Eagles in their home opener on Monday, Sept. 27 and finish the season at Philadelphia.

The good news for the Cowboys Sunday was that the ruling king of their division (if it’s fair to call a team that following a 7-9 season) went down at home. The not-so-great news is that the Los Angeles Chargers, having knocked off one NFC East team, fly home to take on another — the Cowboys — next Sunday.

And then there’s the bad news: What if Jalen Hurts is the next Lamar Jackson?

Let’s start with that question and work our way back around to the Chargers’ 20-16 victory over Washington in a minute. The Hurts/Jackson suggestion is a thing I explored mostly as a fantasy football possibility, where running quarterbacks carry exceptional value, until Sunday afternoon. That’s when Hurts looked as smooth in Atlanta as he once did as an Alabama quarterback, this time leading the new-look Eagles to a 32-6 victory on the road.

It would be foolish to make too much of a win over the Falcons. But the point that’s safe to make is that by dispatching a few veterans including quarterback Carson Wentz along with Coach Doug Pederson, the Eagles have emphatically not waved the white flag on the 2021 season.

Heisman Trophy winner DeVonta Smith scored a touchdown on his first NFL target while leading Philly receivers with 71 yards on six catches. The most important figure for Hurts was 27 completions in 35 attempts — 77 percent accuracy that showed a huge upgrade from his limited play last season.

In 2020, taking over a failing offense with a badly damaged offensive line, Hurts made four starts as a rookie. In those contests, he had two 300-yard passing games, completed 52 percent of his passes and averaged 68 yards per game rushing.

In 2018, Jackson made seven starts as a rookie for Baltimore. He had zero 300-yard games (only topped 200 yards once), completed 58 percent of his passes and averaged 81 yards per game rushing. A year later, with the offense designed to feature him, Jackson ran away with the league’s MVP award.

The Eagles have supplied Hurts not just with a Heisman-winning receiver and two quality tight ends but a massive and healthy offensive line that made all the difference against the Falcons Sunday. Hurts passed for 264 yards and three touchdowns, ran for 62 more yards and made plays with his feet, escaping pressure throughout the game.

The key, though, is that accuracy. Quarterbacks that complete fewer than 60 percent of their passes do not survive in the modern NFL. Hurts may not make a weekly habit of 77 percent, but he certainly appeared in control of new Coach Nick Sirianni’s offense in his first season opener.

Whatever he becomes, Hurts is a vastly different quarterback from Wentz. In Week One, he looked to be improved or at least self-assured with a much better supporting cast. The Cowboys host the Eagles in their home opener on Monday, Sept. 27 and finish the season at Philadelphia. Those games take on a new look after one regular season weekend.

As for Washington, maybe it’s a case of no one getting to repeat in the NFC East any more. Andy Reid and Donovan McNabb were the kids running things in Philly last time it happened (2003-04). Washington’s questionable attempt to upgrade the quarterback position with 38-year-old Ryan Fitzpatrick took a hit when he left the game in the first half with a hip injury. Taylor Heinecke, who certainly wasn’t bad in the team’s playoff loss to the Super Bowl champions, took over, and who’s to say where this team’s offense goes from here?

The bigger problem for Washington is that the vaunted defense didn’t look so vaunted. Justin Herbert led the Chargers to 27 first downs and 36 minutes time of possession. An awareness of those totals will be the first order of business at The Star this week as the Cowboys’ more lightly regarded defense begins its preparations.

As for the Giants, their growth under Coach Joe Judge remains mostly a rumor. They absorbed a 27-13 home loss to a Denver team that can’t yet be identified as a playoff contender. Quarterback Daniel Jones’ biggest failing has been ball security and he had another bad fumble in the third quarter when New York was in Denver territory, trailing by 10.

More alarming for Giants fans were the paltry totals posted by Saquon Barkley — 26 yards rushing on 10 carries and one yard receiving on three targets. Until he re-establishes himself as one of the top five backs in the league, New York is on spoiler alert as in that’s the best role the team can claim in 2021. 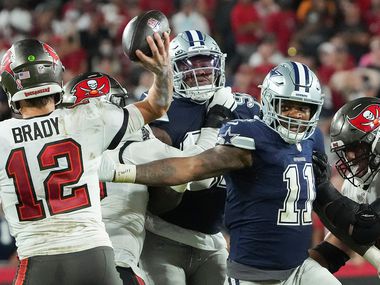