Plus, Jones says quarterback Dak Prescott is “playing better than he was before his injury.”

Cowboys owner and general manager Jerry Jones joined the Shan & RJ Show on 105.3 The Fan [KRLD-FM] recently to talk about Dallas’ win over the Philadelphia Eagles and more. Here are some of the highlights.

What kind of emotions did you have for Dak Prescott’s first home game?

Jones: “I just — I can’t — I think we all remember that picture when he finally got up on that cart and looked up and, boy, that almost a little boy’s look of sadness and wonderment and almost a slight bit of fear about what’s ahead. Just breaks your heart to think that he had that feeling, but then to turn around there and last night before that crowd — I actually think he’s playing better than he was before his injury.”

Dak Prescott looks like he is in total control...

Jones: “You know, another guy that is right there when it comes to what’s inside that you can’t see, that competitiveness, that will: Michael Irvin. And Michael Irvin had a horrendous injury his second year, and he has told me and others many times that that was a turning point with the arrow up in his career because he saw how much it meant to him. He knew what it would mean not to have it, and he felt it. He rehabbed better than anybody that was around him had ever seen or heard of it. He’ll tell you today that it was really an elevation in his career. He just thought he had worked and tried to get over that. Now, I’m not saying that that’s the same situation, but Dak has always — he gets better every film session or every meeting. He takes it to the practice field and gets better there. I believe you can say, I can say that he’s gotten better every time he walks out there.”

Jones: “He has outstanding instincts, football instincts. And, of course, he’s a little brother, Stefon Diggs is his brother, and really has a receiver mentality when it comes to the ball. You hear it from coaches. You hear it all the time. Guys, when the ball is in the air, that’s just as much your ball as it is the potential offensive player, receiver, or back. Go for the ball. Make the play on the ball. Own it. Call it your own, all of that. Well, Diggs is just absolutely — I joked last night — he’s a receiver faking it as a D-back. He sees that ball. He knows, has a sense of where it’s coming, just like a receiver. Those have obviously been as good of interceptions as I’ve ever seen, these last two that he’s made, one against, of course, the Chargers and the other last night. He’s got — the good news is he’s so talented that he has real potential to expand, get better. We all know that those corners do, with experience, just become better. They understand the game. They understand the people they’re playing better, break on the ball, if you will, all of those kinds of things. So, boy, I’m so excited about having him, four or five others, really more than that, over on the defensive side of the ball. We’re really a fresh team. We’re a young team, third-youngest team in the NFL, but we’re also a fresh team. We got a lot of guys that have played in the league three or four or five years and have joined us over the last two years. And they’ve got, boy, it’s a fresh feeling. It’s almost like rookies out there playing, although they’ve had some experience playing with other teams — I’m talking about our free agents.”

What is the plan for Micah Parsons moving forward?

Jones: “Can you imagine when he’s had the reps, he’s had the experiences? It’s like a young child. You are just soaking it up. Everything is soaking up and going in your memory bank. And, of course, he’s doing that and he’s like a sponge, and he just really picks it up and has those gifts. He can take it to the action. I call it hand-eye, but it’s not that. It’s hand-feet, it’s legs, hand-everything, eye-legs, whatever. But the point is that he’s an outstanding person. He’s as pure as mother’s milk. He just basically steps out there and gives you everything he’s got, and nature gave him some skills, and, boy, does he know how to use it.”

What was your plan for Micah Parsons last night?

Jones: “I heard you mention snap count, and he’s in phenomenal shape. He has phenomenal endurance. I’m not seeing the 40th play that he’s in there, any depreciation from the second play or the third play. And, so, he’s got that gift of an energy. Some have it. And, so, I’m not seeing — you know, you say, well, don’t you think that if you’re trying to do so many things, play so many positions that you don’t have the time or put in the emphasis on any one, good at all, but not great at any? I’m not seeing that, because at the end of the day, it’s go get the ball, and, boy, does he do that.”

Everyone seems to be getting fed in Kellen Moore’s offense...

Jones: And how about that Cedrick Wilson? That catch he made that was ultimately ruled out of bounds was one of the finest catches that I’ve seen, but he does that. He does that a lot and he does that in practice, and we’ve seen him do it in the competition and the games. So, I’m so proud of guys that when you mentioned before the season started as specific names, some of these guys were there but didn’t get mentioned. Well, they’re in there making these plays and [Dalton] Schultz out of Stanford, my goodness, is he just continuing to improve. And, so, those are individual success stories growing right before our fans’ eyes, growing right there as a part of a team that’s got me as encouraged as I’ve been in a little while.” 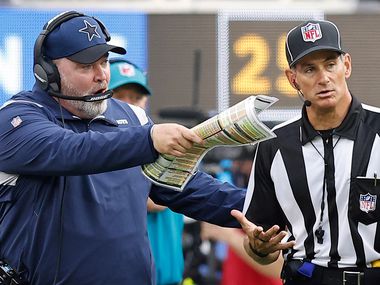