The Dallas Cowboys are bigger than NFC East, and it’s time for them to set their sights higher

For the Cowboys, it’s officially league championship game or bust.

Heads up for Bob Bowlsby: If you’re not done replacing Texas and Oklahoma, how about Philadelphia, New York and the Washington Football Team? You’d be getting into the all-important New York media market, and they’d be getting a league they had a shot at winning. I mean, they’re as good as the teams you’ve been stuffing the Big 12 with. Except the Giants, of course. If it helps, tell the Maras there’s always Kansas.

Ha, ha, just kidding, Bob. Despite all appearances, the NFC East is actually made up of professional teams. I know, right?

The most telling aspect of the Cowboys’ rout of the Eagles on Monday night was that they won by 20 points and were disappointed it wasn’t worse. Can’t really argue with them, either.

Once Dak Prescott learns you can’t always make something out of nothing — and if La’el Collins doesn’t end up under indictment on racketeering charges — Kellen Moore’s offense looks like it could be fairly unstoppable.

Imagine how good Dan Quinn’s defense could be if it learned how to cover a tight end.

And see what happens when Mike McCarthy puts John Fassel and his special teams on a leash.

Put all three phases together as the Cowboys have in a 2-1 start, and it’s too much for the rest of the division. For the first time since the Eagles won the Super Bowl in the 2017 season, it appears the East winner won’t simply be the least of four evils.

The Cowboys should lap the Least. Or that ought to be the expectation, anyway.

Because the rest of the division isn’t in Dallas’ league, and the Cowboys are all out of excuses. Dak is not only is back from his horrific injury, he’s better than ever. Moore’s eclectic offense, operating at a mile a minute, can do whatever the situation requires. Quinn’s defense remains a work in progress. But while he waits on DeMarcus Lawrence, Neville Gallimore, Keanu Neal, Donovan Wilson and the rookie corners, Quinn is getting all-world performances out of Trevon Diggs and Micah Parsons and the kind of effort from rookie Osa Odighizuwa that the Cowboys haven’t seen from a defensive tackle in years. All told, the kids have more than made up for the absences of their elders.

But here’s why Stephen A. is wrong this time: These aren’t the same old fold-on-the-bottom-line Cowboys.

We know this because they’ve already played two of the three best quarterbacks they’ll see all year, and, with some luck in Los Angeles, the defense held its own. The Cowboys won’t face another quarterback nearly as good as Tom Brady or Justin Herbert until Patrick Mahomes on Nov. 21 at Kansas City. Kyler Murray doesn’t come to JerryWorld until after New Year’s. By that time, judging by the improvement he’s supervised already, Quinn should have the defense pretty much at the level he’d like.

Moore has had as much impact on the Cowboys’ success as Quinn. He’s making adjustments on the fly so quickly that defenses can’t counter in time. He’s been so good in developing Dak, in fact, that I wouldn’t be surprised if next year he’s not trying to do the same with Justin Fields as head coach of the Bears.

But if you’re looking for the biggest difference between these Cowboys and the ones you’ve suffered all these years, it’s that they’re not overly reliant on the people hogging all the cap space. Zeke Elliott doesn’t have the same burst, you say? Not so problematic with Tony Pollard sharing the load. Worried that Tyron Smith or Collins won’t hold up? Terence Steele has grown into a dependable offensive tackle. Anxious about Amari Cooper’s busted rib? Dak can still hit CeeDee Lamb or Cedrick Wilson or Michael Gallup, once he’s back. Blake Jarwin makes all the money, but Dalton Schultz is the better tight end.

The same kind of depth shows up on defense. The Cowboys have long been a top-heavy team dependent on its stars, but success in the middle rounds of the draft has deepened the roster. They can better withstand inevitable injuries. We know this because they already have.

Like any other NFL team, the Cowboys can’t afford to lose their quarterback. But, for the record, Dak’s bum shoulder doesn’t appear to be bothering him, either. Bet you forgot about that, didn’t you?

From what we’ve seen, Dak is leading a team as good as any since his rookie year and among a handful of the NFC’s best. The 10-7 prediction here should be the floor for this team, the NFC East title a given.

Time to ratchet up the expectations to where they belong. League championship game or bust. Let’s see them dust off a little history. 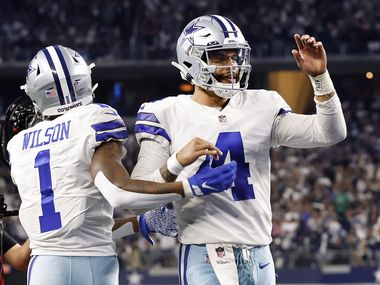