Prescott finished with 445 passing yards and three touchdowns in the Cowboys’ overtime win over the Patriots on Sunday.

Editor’s note: This story has been updated.

McCarthy also said he’s optimistic Prescott will be available for the Cowboys’ next game on Oct. 31 against the Vikings following the bye week.

Cowboys executive vice president Stephen Jones echoed that sentiment during his weekly radio interview on 105.3 The Fan [KRLD-FM] on Monday.

“[We’re] optimistic that we’re going to get good results [with the MRI]. But certainly we’ll have to see how that comes out and we’ll be getting those shortly,” Jones said. “Hopefully, we’re thinking positive and think that he’ll be hopefully ready to go against Minnesota.”

The bye week gives Prescott more time without on-the-field work, which is not expected to resume until Wednesday, Oct. 27. If Prescott is cleared to practice sooner, he might get some limited on-the-field work next Monday.

Prescott suffered the injury on the last play of overtime against the Patriots. While moving to his right, he threw an off-balance 35-yard touchdown pass to wide receiver CeeDee Lamb. Prescott said he felt funny as he landed. He limped to the locker room after the game, needing help from running back Ezekiel Elliott, and conducted his news conference wearing a protective boot on his right leg.

“Didn’t like what I felt,” Prescott said Sunday. “But as I said, it was something, we’ll check out and I could have kept playing if I had to and I’ll be fine.”

Prescott’s injury is to the same leg where he suffered a severe ankle injury last season that required two surgeries and cost him 11 games. Prescott underwent surgery to repair a compound fracture and a dislocation and later got another cleanup surgery to strengthen the area.

Asked about any concerns about it being the same leg injured last season, Prescott said, “I don’t know if I have to be more concerned about it on the right leg than the left leg, but we’ll take our precautions, look at it [Monday] and we’ll go from there.”

The calf strain is similar to what starting wide receiver Michael Gallup suffered in Week 1. Gallup, currently on injured reserve, has missed the last five games because of the injury.

A source said despite having the same injury as Prescott’s, the recovery time and the usage of the leg for Gallup is different. Gallup uses his legs to push off, move laterally and jumps to catch passes. A quarterback, while also pushing off and moving laterally, doesn’t have the same usage rate with his legs in comparison to a wide receiver. Also, how each individual player recovers varies.

Prescott has maintained good mobility after his surgeries. 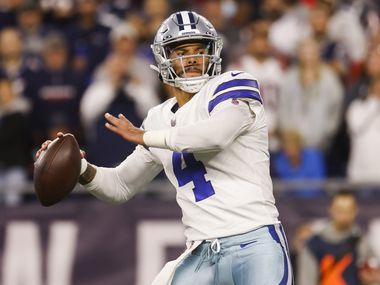