More than slime: What fans can expect watching Cowboys-49ers on Nickelodeon

CBS will do a traditional broadcast of the game featuring lots of schematic analysis. Nickelodeon will offer a different wrinkle.

You should know this: Nickelodeon’s broadcast of the Cowboys-49ers game Sunday will feature much more than just slime.

But, yeah, mostly it’s about the slime.

There will be virtual reality slime cannons exploding after touchdowns, just as there were in last year’s first Nickelodeon co-broadcast with partner CBS. There will be slime trails on replays to designate player routes. There will be a slime booth at AT&T Stadium. And somewhere after the game, the winning coach is likely to get a slime bath. New Orleans’ Sean Payton, after all, set the precedent for that last year when he took a dousing after the Saints beat Chicago in the first Nickelodeon broadcast.

“Will I be willing to get signed?” Cowboys coach Mike McCarthy asked this week, not immediately understanding the question. “Oh, slimed. OK, I obviously haven’t put on Nickelodeon lately. I don’t even know what slime is. … But anything for the children.”

Which pretty much sums up this whole endeavor. CBS, with Jim Nantz and Tony Romo, will do a traditional broadcast featuring dad jokes and lots of schematic analysis. Nickelodeon, which sits under the same ViacomCBS umbrella as CBS, will offer a different wrinkle.

Spongebob will unfurl between the goalposts on kicks. The first-down marking line will be slime green instead of yellow. The Teenage Mutant Ninja Turtles will replace X’s and O’s on replay diagrams. Iain Armitage, the star of CBS’ Young Sheldon, will explain penalties in a clear, yet witty manner, of which Dean Blandino never dreamed. There will be some freestyle rapping by sideline reporter Dylan Gilmer of Tyler Perry’s Young Dylan. The Nickelodeon virtual reality blimp will add another dimension.

And there’ll be football, too.

Yes, it’s an attempt to draw a younger generation of viewers to the NFL. But, more significant, it’s designed to be a “co-viewing” experience, executive produce Shawn Robbins said. Kids can watch it. So can their parents. Together. A novel concept.

Last year’s game drew 2.06 million viewers on Nickelodeon. This year, the network has aired a weekly NFL highlights show — NFL SlimeTime — and has a year’s worth of experience at integrating Nickelodeon intellectual property into the NFL.

“If you love the Cowboys and Spongebob, yeah, we’re the place for you,” Robbins said. “Yes, we’re trying to reach a younger audience. But we’re trying to teach, not talk down to anybody.”

Said analyst Nate Burleson, who spent a decade in the NFL as a receiver: “We want to give the viewer a complete broadcast. We want it to be immersive, so that whether you are a 5-year-old or a 55-year-old, we can reach you. It’s about being genuine so that you can make things digestible for both groups.

“For me, the man who loved the game leads the broadcast, but the kid in me gets to spice up the broadcast. I want people to be able to hear the joy inside my heart.” he added.

Burleson and Robbins each have three kids at home, ranging from ages 8 to 17. They have invested time in Nickelodeon with their kids. A year ago, Burleson spent as much time re-watching Nickelodeon shows as All-22 Film in preparation for the broadcast.

He was able to take questions from Nickelodeon’s 16-year-old star Gabrielle Neveah Green, the third member of the broadcast team along with play-by-play voice Noah Eagle, and spin answers forward in a way that included references to the icons of both the network and the NFL.

This year, Burleson, who played against the Cowboys in the wild-card round in 2007 while with Seattle, also aims to not shy away from the history of the Dallas-San Francisco playoff rivalry. Yes, he said, he’ll tackle nobody’s favorite subject: history. The teams have met seven times in the playoffs with some iconic moments, including Dwight Clark’s “The Catch” to lead San Francisco to a 28-27 win in 1982.

“We want to teach people about the game, but the history is important, too,” Burleson said. “This is a big-time rivalry. I think there is also something pretty cool about the grainy old-school footage. We’re kind of like the cool substitute teacher. We’re going to put a movie on, but you are going to learn something from it, too.”

And if not, you can always sit back and watch the slime. 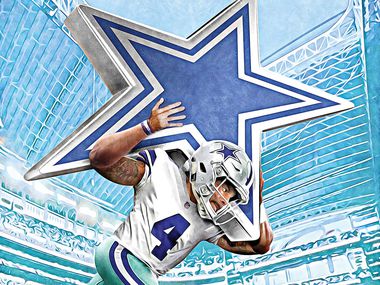 With weight of the Dallas Cowboys on his shoulders, will Dak Prescott meet Super Bowl expectations? 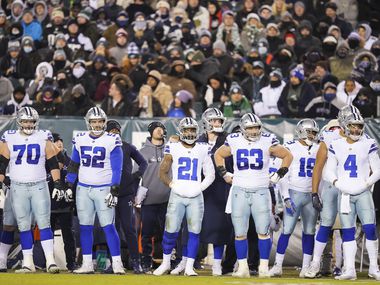 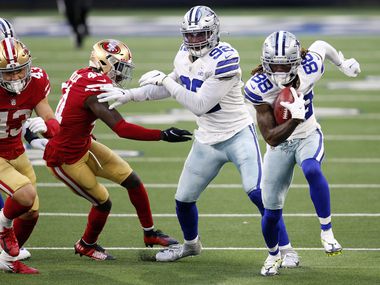