There are ongoing talks for Envy to acquire OpTic brand. Here’s what that could mean.

It’s very early in the Call of Duty League offseason, but massive changes could already be on the horizon.

Envy Gaming and OpTic Gaming have clashed in Call of Duty esports for the better part of a decade.

The two organizations — household names among esports circles — could be joining forces, with Envy in talks to acquire the OpTic brand, according to a source with direct knowledge of the situation.

Dot Esports first reported the news, though the source said that talks are still in their early stages. It’s a long offseason, after all, but the report shook the Call of Duty League offseason like an earthquake.

Envy owner Mike Rufail spoke with The News about CDL rostermania Saturday, but was unable to comment on anything related to OpTic over the weekend.

Neither Envy nor NRG Esports immediately responded to The Dallas Morning News’ request for comment.

Anything beyond discussions are what-ifs, but that’s what would make this move so fascinating. It may disrupt the fanbases of two organizations that grew used to booing each other, but the pieces could fit rather nicely if the Dallas Empire and OpTic brands were to merge for 2022 and beyond.

It’s important to recognize that any such deal would take time because there are several players involved. Hector “H3CZ” Rodriguez, NRG co-owner and CEO, re-acquired OpTic in November 2020 after leaving in 2019. Rodriguez became an owner of two different esports organizations, though both were used for the same Chicago CDL spot.

Were Envy to absorb OpTic, it would have to figure in the roles of Rufail and Rodriguez, among others in the organizations. Much would have to be settled and positions would possibly require tweaking. Easier said than done.

It would also have a big impact on Envy’s future, beyond just Call of Duty, but more on that in a bit.

As for Call of Duty, the roster almost lines up too perfectly.

An unlikely team up

Whether it’s coincidence or not, the moves both the Empire and OpTic made before news of talks broke line up nicely. The Dallas Empire announced Ian “Crimsix” Porter and Reece “Vivid” Drost were restricted free agents on Friday.

This was a massive, though not unsurprising, move, considering Porter is the winningest player in the history of the esport and helped lead the Empire to a 2020 world title.

“In terms of our players specifically, I think we have reached our potential,” Rufail said. “There are quite a few teams you can plug Porter in and it instantly brings them to the top tier of the League. It’s not that we doubted his skill or what he can do.”

While Dallas would be undertaking a massive makeover, the Chicago CDL spot would be the even bigger change. A Dexerto report in May revealed Rodriguez was looking to break away from NRG Esports and focus on OpTic. If Rodriguez were to join forces with Rufail in Dallas, that’d leave the CDL spot in Chicago wide open for another org.

The Empire branding could also disappear. While Dallas followers were happy with the gold and black crown logo of the Empire, an OpTic visual would hold more weight in Call of Duty. The old OpTic, as Call of Duty fanatics know, already began to dissipate.

Dylan “Envoy” Hannon and Matthew “FormaL” Piper announced their own departures from the OpTic lineup on Saturday.

Unrestricted F/A for the 2022 CDL Season.

Assuming no other roster moves would be made, that would make the Dallas CDL team consists of Anthony “Shotzzy” Cuevas-Castro, Indervir “iLLeY” Dhaliwal, Seth “Scump” Abner and Brandon “Dashy” Otell. That’s two ferocious sub players, an AR/sub flex and a main AR player. Nothing else would have to be done, and that roster would be quite competitive for the 2022 season.

Abner, 26, would be the clear veteran. But the rest of the squad would be 22-years-old or younger, giving the team a bright future.

This move couldn’t be all about the CDL, though. At least it wouldn’t need to be.

Envy offers great financial stability in the CDL, which received $20 million from organizations to buy into the league. Envy had a $40 million investment period in April, and notably had music superstar Post Malone become a co-owner in Aug. 2020 right before the Empire won a world championship.

OpTic offers an irreplaceable brand in Call of Duty, filling stadiums with fans across the country, no matter the location. The Major V event in Arlington was rowdy for the Green Wall, and it was the same at Champs in Los Angeles.

Envy has been trying to break its way into the content-creating side now synonymous with esports organizations over the past two years. Bringing in chess streaming superstars Alexandra and Andrea Botez, along with Warzone streamers like Bobby “BobbyPoff” Poffenbarger and Tyler “TeePee” Polchow, helped that cause.

But OpTic is the king of Call of Duty content, with Rodriguez trailblazing in the scene with vlogs, podcasts and promoting OpTic gameplay. The OpTic YouTube channel has 1.4 million subscribers, more than quadrupling Envy’s 306,000 subs.

Talks still mean it’s early, and many factors could lead to a deal falling through. But the pieces fit, even if fans of both organizations would have to learn to coexist.

Envy has always been about fielding the best teams possible, and merging with OpTic for Call of Duty wouldn’t hurt. 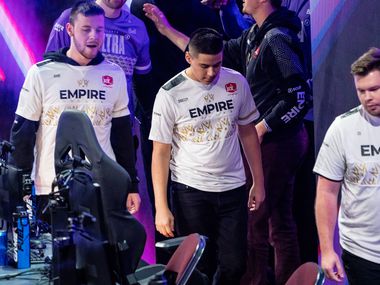 Sign up below to receive Dallas Team Chat, full coverage of North Texas esports, including the Fuel and Empire, delivered straight to your inbox.