The Fuel play the Washington Justice on Sept. 21, starting their run at a championship.

Mike “Hastr0″ Rufail hasn’t truly been in this position with the Dallas Fuel yet, approaching playoff time with a team that has serious Overwatch League title contention prospects. Envy Gaming’s owner set out to rebuild the Fuel after three long seasons of mediocrity.

A new coaching staff and talented roster brought the best record in the West to Dallas, who now have a 6 p.m. playoff match against the Washington Justice on Sept. 21.

The Dallas Morning News recently caught up with Rufail to chat about the Fuel, the upcoming bracket and near future of OWL. Here’s what he had to say:

(Answers have been edited for length and brevity.)

What has it been like to rebuild the team over the offseason and see the championship hopes come to fruition, having a quality setup in the playoffs?

Rufail: “The feeling right now is that nobody is satisfied yet. That’s where we want to be. We want our entire team to feel like the job is not finished, because it’s not.”

How do you like the first-round matchup against Washington knowing you get to play against Jang “Decay” Gui-un and Jung “Closer” Wonsik?

Rufail: “That doesn’t really matter that much. It’s really about the team that we are having to play against. Obviously they are very talented and one of the better teams in the league. We can’t take those guys lightly because Washington is playing really good Overwatch. The best we can do is stay prepared and that’s what we are doing.”

We’ve spoken about how professional Call of Duty has really elevated its gameplay and that a lot of teams are competitive. It seems like it’s the same way for Overwatch this year. Just how much do you think OWL competition has progressed?

Rufail: “I think most teams have figured out their systems and what works. The talent pool has risen to the top and I think a lot of talent that might not have taken the games seriously has been weeded out. Now we have top talent with organizations that have systems figured out and ultimately we will always continue to get more competitive.

“The one thing that I continue to preach to all of our teams is that you have to continue to make progress. Do that and you’ll eventually make your way to the top. Even if we are No. 1 in the West, we still have to continue to improve and stay ahead of the other teams because they are also trying to make that progress.”

Were you excited to learn that the 2022 Overwatch League season would be played on an early version of Overwatch 2?

Rufail: “It’s very exciting and I think everyone watching and participating in the Overwatch League should be excited because it’s an opportunity to launch a new game and immediately have top-tier competition available. The best players in the world will be showing off new skills and that’s going to be exciting to watch.”

Was there coordination that the developers had to do with OWL teams to decide what the game needs?

Rufail: “Yes, we have the developers come in from time to time to speak with us. I think the developers are keeping an open mind about how they can incorporate things into the game that support the Overwatch League. So I think you’re going to see that in Overwatch 2, which is also very exciting.” 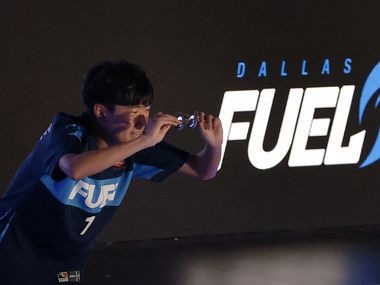 Teams the Dallas Fuel should want to play in the OWL playoffs, and others they should not