How can a one-minute kindergarten test help teachers tackle the ‘COVID slide’?

Dallas has the easiest remaining schedule in the NBA.

The Mavericks try not to pay much attention to the daily fluctuations in the Western Conference playoff standings, though they’re up front about their goal of moving into the top six to guarantee themselves a full playoff series come late May.

That means they might not be aware they have the easiest remaining schedule in the NBA, starting with Wednesday night’s game against the Rockets.

We at The Dallas Morning News, however, don’t have to keep a strict focus on preparing to play against the world’s best basketball players almost every other night.

So, ahead of Dallas’ 50th game of 72 in this condensed, pandemic-riddled season, it’s time to take stock of potential playoff paths.

Which West teams are the most realistic targets for the Mavericks to pass to avoid the Nos. 7-10 play-in tournament? Which opponent will be most important for surging Dallas to beat? What factors could pose the biggest challenges?

Here’s how the seventh-place Mavericks (28-21) stand with less than six weeks left in the regular season.

In their final 23 games, the Mavericks 17 different opponents combine for a .459 winning percentage, worst in the league, as of Wednesday afternoon. The Cavaliers and Clippers are tied for the second-lowest strength of schedule (.467).

After a challenging, road-heavy slate to open the season — and a detrimental COVID-19 outbreak at the same time — perhaps the Mavericks are catching a break.

The Trail Blazers (.547), Suns (.537) and Lakers (.525) have the third-, fourth- and fifth-toughest remaining schedules. All each have to face the NBA-leading Jazz twice more, too.

The rigors haven’t seemed to faze the second-place Suns (35-14), in pursuit of their first playoff berth since 2010. Seven games ahead of the Mavericks, Phoenix is likely out of reach.

While the Mavericks lost two of their three regular-season matchups against Portland, they remain just two games behind and surely won’t be upset to watch the Trail Blazers have to face 17 teams currently in the top eight of either conference in their final 23 games.

The Lakers have also spiraled since LeBron James sprained his ankle, which should make their trip to Dallas this month even more intriguing.

Only the Lakers are ahead in the West.

If fans needed another reason to tune in April 22 and 24, look no further.

As the Lakers have faltered without their injured star duo of James (high right ankle sprain and Anthony Davis (strained right calf), the Mavericks have done the opposite since returning from their mid-February winter storm hiatus.

Dallas is just 21/2 games back of the defending champions with eight until they play for the first time since Los Angeles’ Christmas blowout win.

It’s unclear whether James or Davis, who are out indefinitely, will return by the Mavericks matchup.

Either way, the two-games-in-three-days scenario will be important for Dallas as an opportunity to improve seeding and as its final miniseries scheduling quirk before the actual postseason — against the defending champs, no less.

As the Mavericks experienced earlier in the season between injuries and their COVID-19 outbreak, health and availability may be the biggest difference in what’s become their current 15-6 run and what was their January slog to a 9-14 start.

Kristaps Porzingis, specifically, might present the most pivotal unknown.

The Mavericks’ plan for Porzingis, who missed the last two games for load management and because of a nagging right wrist sprain, is to return Wednesday against the Rockets.

Coach Rick Carlisle said Tuesday after practice that Porzingis is “doing much better,” will travel with the team to Houston, “and I believe he’s going to play.”

The Mavericks have won two straight without Porzingis but had lost five of their previous seven games when he was inactive. Still to play seven back-to-backs in the regular season, Dallas could have to manage a few more nights without their star center.

Remaining strength of schedule, as of Wednesday afternoon, for the West’s current playoff teams: 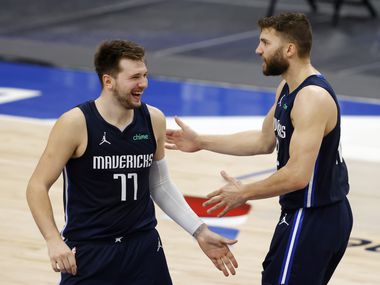