Plus, Kristaps Porzingis is finally healthy as Dallas gears up to start preseason practices next week.

The team will open training camp next week, starting with media day Monday, and begin the regular season Oct. 21 in Atlanta.

Here are five storylines to watch as the Mavericks start their preseason prep:

The summer of change started less than two weeks after the Mavericks’ 2020-21 season ended in a seven-game, first-round playoff loss to the Clippers.

Followers have gotten a glimpse of Harrison’s leadership so far: The Mavericks added four role players during free agency, including potential starter Reggie Bullock, and re-signed Tim Hardaway Jr. and Boban Marjanovic as core contributors to the starting lineup and team camaraderie.

Kidd and the Mavericks have been vague about how he plans to run on-court operations with Luka Doncic, Kristaps Porzingis and company. But expect more clarity to come as the Mavericks practice next week — the first time Kidd and the stars will work together on the court — and begin the preseason Oct. 6 at home against the Jazz.

Doncic likely had the least relaxing offseason of any Maverick.

The 22-year-old led Slovenia through qualifiers and its first-ever Olympic basketball tournament — turning in performances that ranked among the best in the Games’ history while showcasing the crafty, savvy skill and vision that’s made him an immediate NBA force.

After Slovenia just missed winning a medal, losing to France by 1 point in the semifinals and Australia (and Mavericks teammates Josh Green) in the bronze-medal game, Doncic returned to his home country to sign a record-$207 million rookie max contract extension with owner Mark Cuban, Dirk Nowitzki, Harrison and Kidd in tow.

After all that, what’s next for Doncic?

To improve on a dazzling third season in which he started the All-Star Game and earned first-team All-NBA honors — again — Doncic said he would focus more on his free-throw shooting and on-court temperament.

For the first time in his Dallas tenure, Kristaps Porzingis enjoyed a traditional, no-surgery-or-rehabilitation-needed offseason.

In 2019, Porzingis was still working back from tearing his left ACL. Last year, he underwent surgery to repair the lateral meniscus tear in his right knee and didn’t return until mid-January.

After ending last season in relatively good health, Porzingis said he expected a summer of training to improve his base conditioning and on-court skills — rather than having to rebuild his stamina and strength to a previous level after a surgery — would help his consistency and durability.

The Mavericks hope so, too.

Porzingis missed 29 games last season with various ailments and accepted a decoy offensive role in the playoffs under Carlisle’s instruction. Kidd visited Porzingis in his native Latvia this summer and said “he’s in a good place, physically and mentally.”

Behind Porzingis the Mavericks have a logjam.

Center appears to be their deepest position — at least in terms of their number of options.

The Mavericks return Dwight Powell, Willie Cauley-Stein and Marjanovic and added 21-year-old Moses Brown — who’s coming off a breakout second season with the Thunder — via the Josh Richardson trade.

Will Porzingis and Powell share the floor like they did at times late last season, forcing Porzingis to shift from his preferred center position to power forward? Will Kidd’s offense put a premium on five-out 3-point shooting like Carlisle’s did and prompt the Mavericks’ reserve centers to play with more mobility and versatility?

The Mavericks’ hierarchy on the wing is crowded, too.

Dallas finished last season with Hardaway (a top-five Sixth Man of the Year finalist) and defensive stalwart Dorian Finney-Smith as its starting shooting guard and small forward, respectively. But the addition of Bullock — who shot 41% from three for the Knicks in 2020-21 — might change the rotation.

New kids on the block

Mavericks fans’ first chance to see the team in-person will come Oct. 3 in the team’s annual Fan Jam, back after a 2020 pandemic hiatus.

There will be a few new names and numbers to learn.

The expectations, however, will remain the same.

The Mavericks, who lost a 2-0 lead against the Clippers last postseason, haven’t won a playoff series since their 2011 championship run.

Have they done enough re-tooling to end the drought?

That’s the one question Dallas won’t answer in the preseason. 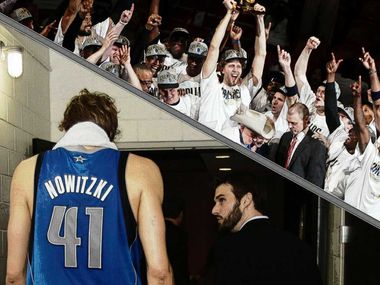