5 things to know about new Mavs PG Frank Ntilikina, including his improved shooting

The French point guard spent the last four seasons with the Knicks.

The Mavs got a little bit more international when they signed former Knicks guard Frank Ntilikina to a deal heading into training camp.

Here are three things to know about the new Mav:

Draft: Selected eighth overall in 2017 by the Knicks

Ntilikina was selected to be a member of the French national team this summer during the Tokyo Olympics and won a silver medal in the games. The French team eliminated Slovenia in the semifinal game to earn a spot in the gold medal game where France would lose to the United States.

In the gold medal game Ntilikina scored five points to go along with an assist and a steal in 11 minutes on the court. It was the most he scored in any game at the Olympics.

When the Knicks drafted Ntilikina eighth overall in 2017 it wasn’t because of his offense, but his defensive upside. The French point guard has a 7-1 wingspan and had this to say about the importance of the less glamorous side of the ball and about his new coach Tom Thibodeau in Dec. 2020.

“Of course it translates, defense is really important in the game nowadays,” Ntilikina said. “It allows a team to win championships, and to be consistently in games and win. He of course had a big emphasis on that side of the court.”

Over the course of his four seasons in the NBA, Ntilikina averages 1.5 steals and 0.5 blocks per 36 minutes.

Ntilikina’s 3-point attempts per 36 minutes actually increased from 4.2 in 2019-20 to a career-high 5.4 last season. In 2020-21 the Knicks as a team took very few shots from behind the arc, hoisting up just 30 triples per game, which ranked 27th in the league. But what they lacked in quantity they made up for in quality by making 39.2% of their 3-pointers, which gave them the third-best 3-point shooting percentage in the NBA.

According to Basketball Reference, the newest Maverick has three nicknames: Frankie Smokes, as coined by Jason Conception in 2017 while at The Ringer (now with Crooked Media), The Frenchise (a play off of former Knick Steve Francis’ nickname “The Franchise”), and The French Prince. 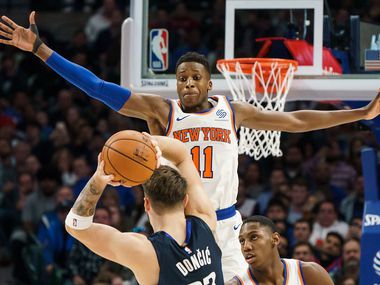