Four Western Conference teams — Utah, Phoenix, Denver and the Clippers — were in front of the Mavs in offensive and defensive ratings last year.

When last we saw the Mavs in a game that mattered, Rick Carlisle was still coach, Kristaps Porzingis the goat (lowercase) and Donnie Nelson about to argue that Luka Doncic must spread the love, a case that didn’t exactly endear him to Lukaphiles who figured what he really needs is a few teammates who can, you know, shoot.

The Mavs begin again Thursday in Atlanta without Uncle Ricky and Donnie. But Porzingis is back, and the key to the season, at that.

As for all the discussion about the offense?

Turns out they’d rather talk about defense.

“We’ve got to be better defensively,” Luka said.

Told this week that his superstar point guard brought it up unsolicited, Jason Kidd barely suppressed a smile. The Mavs are “way better,” Luka said. How much? In preseason games, their defensive rating of 92.6 — a 20-point improvement over last season — put them among the league leaders.

Of course, Kidd knows it’s a tiny sample size. The Mavs can’t maintain anything close to such a pace over 82 games. Gotta save something for the other end.

But Kidd, who won a title in Big D on a team that actually played a little D, knows what it means to a team with title hopes.

“It’s something we need,” he said.

Maybe you remember Carlisle making the same point going into last season. They traded Seth Curry for Josh Richardson to back it up. Carlisle was of the belief that if you want good defense, go find a guy who plays it. But for reasons that aren’t yet quite clear, Richardson never lived up to his pedigree. James Johnson, another tough guy, couldn’t get on the floor. Neither could Josh Green. The Mavs drafted Green ahead of Saddiq Bey, now a budding star in Detroit, because of his potential as a 3-and-D guy, but Carlisle didn’t see the resemblance.

Kidd, on the other hand, seems ready to give Green a chance. Even went out of his way to say so this week. Green isn’t his only defensive option, either.

All four of the guys new on this 15-man roster — Reggie Bullock, Sterling Brown, Moses Brown and Frank Ntilikina — are good defenders. Kidd simply has better options than Carlisle had.

Especially if one of them is Porzingis.

Did I mention he’s the key to the Mavs’ hopes this season? Just checking to see if you’re still awake. Porzingis must play up to his contract. Not to justify the money, but to justify what his contract represents. He needs to be the second option, because that’s the kind of talent he has. It’s what he was in New York.

Over the last two seasons in Dallas, he’s shown flashes of the talent that led Kevin Durant to call him the Unicorn. And, in truth, he’s probably been better here than you think. Averaged 20.3 points and 9.2 rebounds. But that perspective has mostly been obscured by his availability and stat line in the playoffs last season, when his head coach turned him into the world’s tallest decoy.

Frankly, I’m not sure about the origin of the disconnect. Was it between Porzingis and Carlisle? Or Porzingis and Luka? The latter certainly seemed a possibility, though Luka said it’s mostly a figment of the media’s imagination. No question there was an issue between Carlisle and Luka, and it’s one of the reasons Carlisle left town. The Mavs had better hope Kidd does a better job making nice with his two best players.

So far, so good. Porzingis has looked like a different player in the preseason. “Way better,” as Luka likes to say. Maybe it’s because he’s healthy and enjoyed a full offseason without rehab. A factor, no doubt.

But what’s more likely is that Porzingis feels like he’s no longer an afterthought in this offense. Carlisle always praised Porzingis’ abilities as a rim protector, but he didn’t reward those efforts by making him a focal point of the offense. Porzingis too often looked like a kid without a date at the prom. Hard on the superstar ego.

Fixing Porzingis was one of Kidd’s priorities when he came to the job, as it should have been. It’s too soon to give up on a former All-Star still just 26. Even if you were so inclined, the contract makes it nearly impossible.

Besides, we’ve occasionally seen what Luka and Porzingis can do when each is at his best. We’ve seen it this preseason. Given a definitive role in the offense, Porzingis has been energized on defense. Funny how quid pro quo works. The Mavs’ hopes ride on how long it lasts. 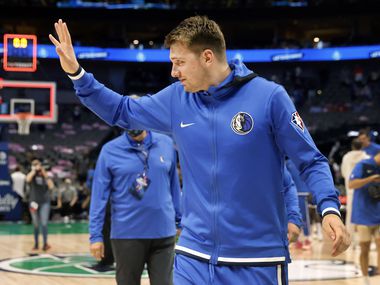