Riley discussed deciding factors in naming a starter and the mindset of Spencer Rattler on Wednesday.

Here are three takeaways from Lincoln Riley’s availability with the media prior to No. 4 Oklahoma’s matchup with TCU on Saturday:

As was reported Tuesday, Oklahoma head coach Lincoln Riley doesn’t plan on naming a starting quarterback prior to game time on Saturday.

Even so, discussion about the Spencer Rattler/Caleb Williams decision and what will go into it took up the majority of Riley’s time on Tuesday.

“There’s going to be, mentally, a little bit more ‘feel’ with this [decision],” Riley said when asked how he’ll choose Saturday’s starter. “But I’ve also got a lot more to go on with both these guys. In Spencer’s case, I’ve obviously been in a lot of battles with him. The experience, the trust factor, that’s all there.

“With Caleb, I’ve seen more reps day in and day out. Got a chance to see him play in some games, so we’re learning more.”

Riley was also asked if he would consider a two-quarterback system that teams sometimes run in the NCAA, and, while he didn’t completely shut the idea down, his response indicated that the team will mostly be employing a traditional QB1 offense. Fans will just have to wait until Saturday to find out for sure who that QB1 is.

Rattler’s mindset, and the all-important portal

A heavy consideration in 2021 college football, prior to a head coach benching his starting QB in favor of the backup, has to be if that benched quarterback is going to immediately hit the transfer portal. And likewise if the backup feels like they’re a backup for too long. In the age of the one-time transfer -- and of name, image and likeness -- it’s hard to retain two good quarterbacks on your roster.

Riley said he fully expects to have both Rattler and Williams for the entire 2021 season.

“I know there’s never 100% [certainty] but I think both of those guys are pretty committed to this football team,” he said.

Riley also mentioned that he’s been honest with his guys about how he and other coaches view players who enter the portal and leave their team early.

“I don’t want to speak for everybody but I can tell you personally,” Riley said. “If I’m looking at a guy that’s a potential transfer, and that guy quit on his team midseason? Unless there’s an extenuating circumstance, I’m going to have a hard time taking him, and I think a lot of other coaches would echo that as well.”

Rattler apparently was given the day off practice on Monday to “rest and recharge,” Riley said. The redshirted sophomore’s fall in 2021 has been staggering and something not too often seen in college football. A preseason Heisman favorite, a No. 1 overall pick in some early NFL mock drafts, now possibly has lost his job just six weeks into the season.

Huge team win yesterday. Proud of all my brothers. 6-0!

“Considering the circumstances, he’s doing well,” Riley said when asked about Rattler’s mindset. “It’s not easy for a young guy. This guy gets painted a different way publicly than what he really is. He’s a great kid, he’s worked his tail off here and he’s been a great player.”

It wasn’t just Caleb Williams that showed out in Red River on Saturday, though the quarterback’s performance in the Sooners’ comeback win certainly got most of the attention afterwards.

Running back Kennedy Brooks and wide receiver Marvin Mims both had career days at the Cotton Bowl and heavily contributed to the wild second-half flurry of points OU put up. They also took turns setting the internet ablaze on Saturday with a pair of plays that sent the Twitter world into a frenzy.

Brooks, of course, won the game with his 33-yard direct snap touchdown with three seconds left in the game. The junior out of Mansfield High School ran for 217 total yards on Saturday, the first time a Sooner has gone over 200 yards rushing in three seasons. He’s on pace for his third 1,000-yard season, this after missing all of last year due to a COVID opt-out.

“He’s learned a lot, I think he’s really grown up a lot in the last few years,” Riley said. “His work ethic’s gotten better, practice habits have gotten better. It’s fun to see a guy who is a ‘team-first’ player having success and doing the things he’s doing well now, especially after how last year transpired.”

Mims, another local product out of Frisco Lone Star, also lit up the stat sheet on Saturday with five receptions for 136 yards and two touchdowns, and one of them will be looked back on as one of the best catches in all of college football this season. And possibly as the best moment in the history of Pylon Cam.

“He was awesome,” Riley said of the sophomore. “The plays he made on the balls downfield were huge plays. And just great competitive plays, which is something as a receiving corps we really try to pride ourselves on. He did a great job and it was good to get him a little bit more involved here the last couple weeks.”

Mims was mostly off the radar as the OU offense staggered early in the season against Nebraska and West Virginia, totaling only four catches for 57 yards over those two games. He’s combined for over 200 against Kansas State and Texas, though, and appears to be back to form as one of the toughest covers in the Big 12.

Briefly: Riley also mentioned the return of running back Marcus Major, who was recently deemed eligible to play for the 2021 season after initially being ruled academically ineligible to start the season. Major has begun to take reps in practice, Riley says, to get back in the flow and rhythm before he gets back into game action, at which point he’ll offer more depth for what to this point has been a two-deep running back position for the Sooners. 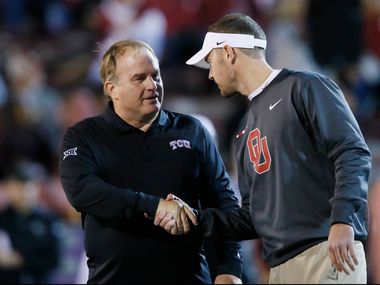