The program has halted all media access until after Saturday’s game against TCU.

The intrigue around the Oklahoma quarterback situation continues to build as the football program announced it would be halting all media access until after Saturday’s game against TCU.

OU football has canceled all media availabilities today. No reason given. No more media until after Saturday's game.

The announcement comes after Oklahoma’s student newspaper, The OU Daily, released a report concerning the goings-on in a closed-to-the-public OU football practice, most notably the number of first-team snaps taken by freshman quarterback Caleb Williams and incumbent starter Spencer Rattler.

From the report: “The Daily watched the offensive practice regimen from a public building near the OU football practice field, with no athletics employees discouraging observation. The Daily does not observe practice regularly, but did so Tuesday under heightened interest given the situation.”

Lincoln Riley spoke with the media in his normal time slot Tuesday and said that he wouldn’t be naming a starting quarterback for the TCU game until Saturday. This comes after Williams took over for Rattler against Texas last weekend at the Cotton Bowl and led Oklahoma to a comeback victory. Rattler finished the game eight of 15 passing attempts with an interception and a fumble lost.

The Daily reported that Williams took 15 of 22 snaps with the first team at practice on Tuesday.

Typically, Oklahoma makes three to five players available for Wednesday afternoon media sessions (with Rattler participating multiple times so far this season) but those were canceled early Wednesday morning. Riley usually meets with OU beat writers on Thursdays, but those have been canceled as well, per SI Sooners’ John Hoover.

As of now, there’s still no official indication from Riley or any of the OU coaching staff as to which quarterback will start on Saturday against TCU. 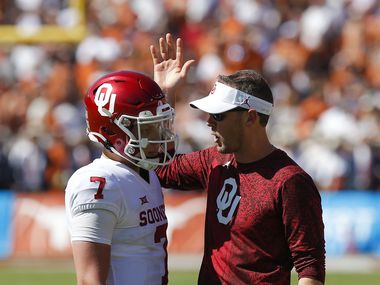