Could the XFL return to Globe Life Park in 2022? There’s optimism for it

The third iteration of the XFL is scheduled to come back in 2022, but will the Dallas-Fort Worth area once again be a part of the professional football league?

The XFL hasn’t announced its field of teams yet, but reconfigured Globe Life Park, the Arlington home of the XFL’s Dallas Renegades during the shortened 2020 season, is open to another go at hosting professional football.

“The Texas Rangers are very interested in having the XFL return to Globe Life Park,” a team spokesman for the Rangers told The Dallas Morning News this week. “We have been in discussions with the XFL toward that goal, and while we are optimistic that will be the case, nothing is finalized at this time.”

This is an opportunity. The #XFL will kick off in 2022! Don't miss it: https://t.co/IPkdyhE80z #ForTheLoveOfFootball pic.twitter.com/oYMRmFNDWk

Globe Life Park, the former home of the Rangers, hosted practices and three Renegades home game this year before the season was cut short because of the COVID-19 pandemic. The Renegades, led by former Oklahoma coach Bob Stoops, finished 2-3, including losses in every game at Globe Life Park. Those games had an average attendance of more than 17,000.

Shortly after the 2020 season ended, the league — owned by WWE’s Vince McMahon, just like the first iteration — laid off all its employees and filed for Chapter 11 bankruptcy. The future of the XFL was in jeopardy, but the league and “substantially” all its assets, according to a news release, were purchased on Oct. 1 by an ownership group led by Dany Garcia and actor Dwayne “The Rock” Johnson.

“The XFL represents the idea of ultimate opportunity; it’s a league of soul and culture, anchored by the pursuit of dreams and love for the game, that we couldn’t be more proud to lead,” Garcia and Johnson said in a joint statement. “Every XFL player, coach, city and fan is our top priority and we couldn’t be more excited to champion them in an electrifying 2022 season. We are the new XFL — hungry, humble and no one will outwork us.”

The News reached out to the XFL to see if the D-FW area was in its plans, but didn’t hear back at the time of publication.

“Now, the fact that we have a venue that is repurposed, and for us it means the opportunity to find new events and sporting events that can fill that stadium,” Ron Price, the president and CEO of the Arlington Convention and Visitors Bureau, told The News in February.

Subscribe now and get 1 month free with the code: JOEH 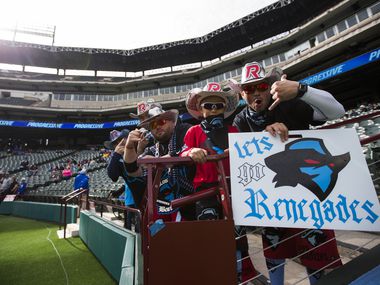 By Joseph Hoyt
In This Story
Hide

Joseph Hoyt, Staff Writer. Joseph has covered high school sports for The Dallas Morning News since November, 2018. After graduating from the University of Oregon in 2016, Joseph interned at The News before working for The Ames Tribune and KOIN-TV in Portland.