Sullivan, an incoming freshman swimmer at Texas, sat atop a platform in front of reporters Wednesday at Tokyo Aquatics Centre, silver medal around her neck, recounting her years of hardship that preceded the moment she touched the wall in the women’s 1,500-meter freestyle final.

Her path from Las Vegas to Tokyo and soon to Austin required her to navigate mental health issues after the death of her dad in 2017. To find her voice and confidence as a half-Japanese, lesbian woman. To perfect a patient strategy in the sport’s longest race. And to endure a period early in the pandemic when Lake Mead, a reservoir formed by the Hoover Dam, was the only open water she could access for training.

Some obstacles — especially, she joked, the “absolutely disgusting” lake where she suffered from parasite bites — built her character more than others.

All, however, contributed to her transformation into the engaging, spirited future Longhorn who slapped the water after she finished her swim, looked to the video board and saw her name underneath Ledecky’s.

“This is kind of self-centered but I’m going to say this, so sorry for that: I feel like I am like the epitome of the American person,” Sullivan said. “I’m multicultural. I’m queer. I’m a lot of minorities in that sense, and that’s what America is. America, to me — it’s not being a majority. It’s having your start. The American Dream is coming to a country to be able to establish what you want to do with your life.

“Me getting to be on the podium in Japan as an American Asian woman and then to take silver in a historical woman’s event for the first time as someone who likes women and identifies as gay, it’s so cool.”

Sullivan was referring to the 1,500-meters Olympic debut in the women’s program. Many expected Ledecky to crush her signature event at her first Olympic chance, but fewer predicted Sullivan to be just behind.

She opened the race in seventh place through her first five laps in Lane 3. Even as she pulled into fifth midway through, Sullivan remained several body lengths behind the swimmers from Germany, China and Italy who tried to challenge Ledecky early.

But as the race progressed, Sullivan showed her stamina and patience and turned splits faster than the leaders.

With about seven laps remaining, she’d pulled into a dead heat with opponents in second through fifth.

By the last three turns, Ledecky and Sullivan appeared primed for a 1-2 American finish.

Sullivan swam almost 10 seconds faster in Tokyo than she did about six weeks earlier at Olympic trials, where she finished 11 seconds behind Ledecky.

“My race plan was just to stay in control of the race,” Sullivan said. “I’ve just had far too many races where I’ve taken it out too recklessly and I’ve really paid the price.”

Even in a mostly empty arena, mid-pandemic, Sullivan reflected on the significance of her medal beyond the pool.

Her mom is a Japanese citizen, she has visited family in the country often, and she speaks the language fluently. She deferred enrolling in college until after the Olympics — and then after the postponement — and then flipped her commitment from USC to Texas last fall.

After her dad, a former collegiate swimmer at Wisconsin, died of esophageal cancer in 2017, Sullivan, then 16, said she battled anxiety, depression and post-traumatic stress disorder.

She reached a point in 2018, she said, where her coach debated whether to pull her from meets until she sought psychological therapy.

“I really hope I can be, like, a beacon of hope to anyone who’s struggling with mental health or coming out or any minority they are,” Sullivan said. “There’s hope, and honestly to get to do it here where half my family is from means the world.” 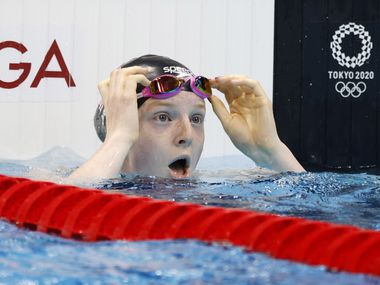