How does it work if you skip mortgage payments?

What Rangers’ opening day will really mean once it actually happens

It’s all a matter of perspective for manager Chris Woodward and his club.

A year ago, Chris Woodward began his career as Rangers manager by making one of those highly analytical baseball decisions that are dissected: He sat Shin-Soo Choo on opening day because the Rangers were facing a lefty.

This is how he began what was supposed to be opening week of his second season on the job: Like the rest of America, searching for toilet paper. Unsuccessfully.

Instead, he and his wife, Erin, recorded a message of thanks for health-care workers and first responders on the front lines of the coronavirus pandemic. The Woodwards, GM Jon Daniels and his wife, Robyn, will donate approximately 1,000 meals to health-care workers over the next week. Erin, by the way, is a trauma nurse by trade. She just wrapped up what was supposed to be her last contract at the nation’s ninth-busiest emergency room, Banner Health Desert Medical Center in Arizona. She could be asked to go back, if the system gets overwhelmed and if there is enough personal protective equipment.

“Just looking back even two weeks ago, I had a much different thought process about everything,” Woodward said this week.

“This has put things in perspective; not a perspective you would ever want to have. We have long taken some things for granted; now for a lot of people, if you find paper towels, that’s a win for the day. It’s like that for people in a lot of places around the world. I hope when we get to the other side of this, there is a sense of perspective gained that people will not lose. Hopefully, we will not take each other for granted.”

It seems so strange — doesn’t every sentence start out this way, now? — that there will be no baseball this week. But here we are.

Thursday was supposed to be opening day, an unofficial holiday, when people skip work and MLB offers to write a note to their teachers or bosses. Baseball may or may not be the national pastime any longer, but there is a certain sense of normalcy of life that comes with the pomp of opening day.

There were “important” things still to be resolved like who would have started for the Rangers (probably Lance Lynn), whether Choo would have been in the lineup against a lefty (uh, yes) and who might have been at first base (my guess: Todd Frazier). This all seemed so important and so suspenseful two weeks ago.

And it will be again. At some point. When? Nobody can say.

MLB and the players’ association continue to discuss elements of how to resume preparing for the season and what adjustments will have to be made to rosters and schedules. What is clear is that when baseball does return, Woodward will have to revisit all the decisions that loomed so difficult two weeks ago, but now seem so trivial. A lot of those decisions will have to be made quickly and without the benefit of a full spring training. It becomes no easier to tear people from their dreams, Woodward said.

When baseball returns, though, it will mean something close to normalcy. Even if there are uncomfortable conversations to be had, there is comfort in knowing the normalcy has returned.

“I think whenever it returns, we will all enjoy and savor the moment a little bit more,” Woodward said. “We are a society that wants to be around each other. When we can be safe and be together, we will all enjoy those moments more.

“Right now, we can’t be around each other,” Woodward added. “In times of crisis, you look inward instead of outward. And that’s difficult to maintain when you can’t be around one another.” How Rangers’ minor leaguers are coping without baseball, uncertain futures 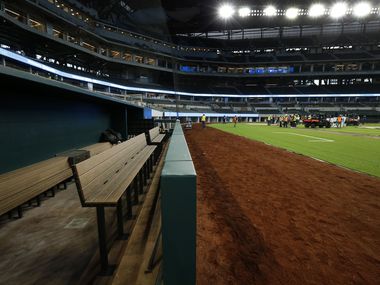 Cowboys are closing in on an NFL draft we’ve never seen before, but what comes after?

Most important Mavs stats: How the West’s playoff seeds would look if Dallas fared better in clutch time

While Jamie Benn is ready to get back on the ice, he says the break ‘couldn’t have come at a better time’ for the Stars

Scouting the Rangers’ top prospects, No. 14: Davis Wendzel’s glove will play at 3B, but can his bat match up?

News, analysis and opinion about the Texas Rangers delivered FREE to your inbox.