Tank for Kumar? With the grand prize of Vanderbilt’s Rocker on the line, it’s bottom or bust for the Rangers

To have a chance at drafting Vanderbilt’s man-mountain of a pitcher, the Rangers will need to play some of their worst baseball.

As bad as the Rangers' dismal season may seem, let me assure you, it isn’t nearly bad enough.

How low can they go?

Time to find out.

Pierre de Coubertin kicked off the Olympic movement with a motto of Citius, Altius, Fortius, or Faster, Higher, Stronger. In memory of ol' Pierre and in hopes the worst is yet to come, here’s a motto for the Rangers' times:

That’s Kumar as in Kumar Rocker, Vanderbilt’s man-mountain of a pitcher and the grand prize awaiting baseball’s most abysmal team in next year’s draft.

Before getting your holier-than-thou hackles up, simmer down. Now’s no time for the faint of heart or stomach. Don’t tell me tanking sets a bad example for the kids. Shame on you for letting your kids watch these Rangers in the first place.

Besides, it’s not like we thought of it first. Already hashtags are circulating nation-wide as fans realize there could actually be a pot of gold at the end of this pandemic. #TankforKumar is the politest of the campaigns. In the interests of keeping it kid-friendly, go with #KumarRanger. In a sign of good faith, I’ll even sign over the marketing rights.

The rest is up to the Rangers, and, frankly, even though they’re among five teams in the race to the bottom, they’re off to a slow start. Over the weekend, they played some of their best ball at the worst time, splitting a series with Oakland. This simply won’t do. Losing four to the A’s not only would have put the Rangers on Pittsburgh’s tail with two weeks left, it wouldn’t have so much as raised Rob Manfred’s eyebrow.

The commissioner negotiated an agreement with the union in March that gives him the right to “modify” the draft order if teams played fewer than 81 games this season. Make of that what you may. Seems to indicate a belief that some organizations wouldn’t take a 60-game season seriously and play accordingly. At any rate, organizations reportedly are working under the impression that, all things being equal, the order of picks won’t deviate from winning percentages.

Even if you started this season with the best of intentions, as the Rangers did, at least it’s easier to stomach the idea of tanking for a couple of weeks instead of an interminable three months.

Especially if it vaults you to the top of a draft with a couple of the best pitching prospects in years.

In case you haven’t heard, Kumar is the 6-5, 255-pound son of Tracy Rocker, the former Lombardi and Outland Trophy winner from Auburn. Besides size and athletic pedigree, Kumar is a smart kid with a fairly refined approach. Scouts talk about how fun it is to watch him stalking a mound. His first season at Vanderbilt, he finished 12-5 with 114 strikeouts and just 21 walks in 992/3 innings. The bigger the stage, the better he liked it. In the NCAA Tournament, he went 4-0 with 44 strikeouts and five walks in 28 innings.

Among the highlights: With Vanderbilt on the brink of elimination in the super regionals, he threw a no-hitter against Duke, striking out 19 in the process.

Baseball America named Kumar its Freshman of the Year. He was on track for similar results as a sophomore before the coronavirus shutdown.

Of course, I understand all the caveats here. By the time the draft comes around, there’s a good chance Kumar may not have pitched in more than a year. You’ll find more busts in the first round any given year than in the Pro Football Hall of Fame in general. Especially pitchers. There’s no guarantee Kumar would front the Rangers' rotation in, say, 2023. But that’s the way to bet, if they play their cards right.

Going into the regular season’s final couple of weeks, the Rangers are among five teams with the inside track at the first pick. The Red Sox, Nationals, Pirates and Diamondbacks are running neck-and-neck, with Pittsburgh leading by a nose. Frankly, kids, it’ll be hard to be as bad as the Pirates. And it’s not as if the Rangers have been trying, if that’s what you were thinking. Chris Woodward will tell you there’s no quit in this team. He needs to look a little harder.

If the Rangers can’t sink low enough from here on out to reach Kumar, they could still be in range of his teammate, Jack Leiter. Son of Al, who pitched 19 years in the big leagues, Jack isn’t as big as Kumar, but he might be as imposing. He’s universally regarded as the second pick, anyway.

Maybe you’d be happy with either Vandy pitcher, and if that’s your attitude, well, you need to get your mind right. No team should tank for No. 2. The Rangers are going all the way! It’s the bottom or bust! Put a hashtag on that, pal. 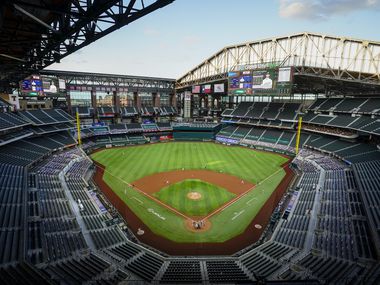 Washington can’t find consensus on anything, so politicians keep shoving their ideas down our throats