A two-year plan in Texas depends heavily on what could be accomplished over the next few months.

SURPRISE, Ariz. — A travel story, since the Rangers are on quite the sojourn: First time I went to Rome, landed a Saturday afternoon visit to the Vatican, which was designed to wind up in the Sistine Chapel. But it was time to start getting things ready for Sunday morning, which meant making hard choices.

“Here, we have the Etruscan Museum, with artifacts thousands of years old from the founding of Rome,” the tour guide said, moving somewhere between a jog and a sprint. “And ... we’re not going to see it. Keep going.”

Which is quite the segue back to the Rangers and free agency the last few years. Come this week of October annually, because there have been no playoffs in which to participate, the front office gets together with the team’s pro scouts to consider offseason acquisitions. A notebook on upcoming free agents is handed out ... and the Rangers skipped right to the back of the book where the bargains were listed.

Not so this week.

“We didn’t start on the first page the past couple of years,” Jon Daniels, president of baseball operations, said Tuesday after the second of three scheduled marathon meeting days. “We kind of flipped past it. It’s been good this year. The [scouts] have a lot of freedom to make recommendations and to really dig into players. It’s definitely been more enjoyable.”

Stop us if you’ve heard this before: The Rangers plan to spend money this winter. A lot of it. Perhaps not to the extent of the proverbial “drunken sailor” trope. Maybe more like a gently buzzed naval officer.

The point being there are real dollars available. In the first week after the season, Daniels said the Rangers would move back toward a payroll “consistent with the market size,” which is, however you define “market size,” in the top tier in MLB. The qualifier being: They won’t necessarily make the jump in a single year. More like two.

The best way to explain the current state of the rebuild is this: Daniels and general manager Chris Young see it as no more than a two-year process in which the Rangers combine significant financial resources, high draft picks and a restocked farm system to jump back into real contention. A lot of teams have two of the three elements at their disposal at once. The separator, the Rangers believe, is they also have the financial wherewithal.

Asked if the Rangers were happy with where they are in this process, Daniels flipped the question.

“We are happy with where we are going,” he said.

Added Young: “I would say ‘optimistic’ is the right word. We’re optimistic that some of the things that we’ve laid out and are putting in place are going to set us up for success.”

On the free agent market, that means this: Daniels and Young have convinced ownership to do what’s necessary to land high-profile free agents, the “core position players” Daniels discussed (without, of course, naming names). What is necessary is a willingness to go to seven years – or beyond – at top dollar to land one of the shortstops on the market. If you want Marcus Semien or Trevor Story, you better be willing to get close to seven years. If you want Carlos Correa or Corey Seager, think closer to a decade.

Since the Rangers signed Shin-Soo Choo for seven years and $130 million in 2013 and added about $80 million in obligations in the Ian Kinsler-for-Prince Fielder deal, the ownership group has shied away from big deals. In the last seven years, it has done nothing more than three years or more than a $30 million commitment. The owners found some bargains, but not core players. Did they feel burned? Maybe. Principal owners Ray Davis and Neil Leibman don’t say much. But their actions speak. And Daniels spoke on it.

“We made two big commitments, made two big bets at the same time,” he said. “Prince, in particular, was challenging because he’d never missed a day in his life. ... What’s the word? We all learn from our experiences, right? But we are open to it. We are open to a long-term deal for the right player.”

Now, cue up all those debates over which is the right player. And how to get them to Texas.

Unless Atlanta’s Freddie Freeman makes it to free agency, the “right” player is almost certainly a shortstop. That class is led by Correa. And it also presents a perfect example of the challenges the Rangers will face. Already, New York Yankees GM Brian Cashman has said shortstop is a significant “need” for the team. Likely translation: Carlos, it’s your time in New York.

After that, there are various cases to be made for any of the others. Irving’s Story might most want to be in Texas. Seager might most exemplify the kind of winning culture with which the Rangers want to infuse their clubhouse. Semien is going to finish in the top five in the MVP voting for the second time in three years, is determined and dogged and, since he’s the oldest of the group, might be more willing to take the shortest of the long-term deals. They all bring significant assets. They all present significant risk, too.

Sure, there are challenges in landing them. But the challenge of how to land one is something the Rangers relish. They’ve spent enough time flipping to the back of the book and waiting to see how everything else ends up before getting to work. 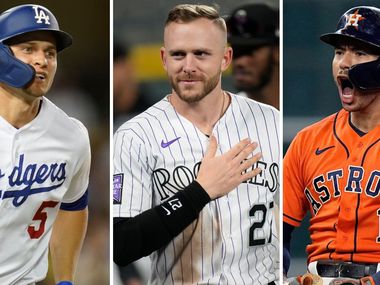 If the Rangers will break the bank for big-name free agents, who’s willing to come to Texas?