The day was initially started as a response to a rash of bullying-related suicides of LBGTQ teens in 2010.

The Rangers on Thursday tried to participate in an MLB-sponsored social-media initiative against bullying of LGBTQ teens without actually acknowledging the specific group Spirit Day was designed to support.

The club’s decision and continued official stance of not acknowledging the community publicly left the Rangers as a flashpoint on sports Twitter for a day, frustrating some of the team’s fans inside the LGBTQ community.

The day, observed on the third Thursday of October for the last decade, was initially started by Canadian teen Brittany McMillan as a response to a rash of bullying-related suicides of LBGTQ teens in 2010. McMillan wanted Spirit Day “to make one person feel a little bit better about his or herself and to feel safe enough in their own skin to be proud of who they are.”

Since starting the commemoration, it has gained much wider acceptance with people wearing purple to show support.

On Twitter Thursday, all 30 MLB teams made some kind of anti-bullying statement with a purple logo, in support. In some fashion, 28 of 30 teams explicitly mentioned the LGBTQ community.

Join us in taking a stand against bullying and in support of inclusion. #SpiritDay pic.twitter.com/mfJoEHvwA6

The Rangers, the only team in MLB which does not host a Pride Night game, Atlanta Braves and Arizona Diamondbacks did not mention standing with the LBGTQ community in their official tweets. The Braves did link to GLAAD’s educational page about the event. The Diamondbacks retweeted their charitable foundation’s tweet, which pictured members of the front office wearing purple T-shirts and cited bullying against the LGBTQ community.

The Rangers tweet read innocuously enough: “Join us in taking a stand against bullying and in support of inclusion. #SpiritDay.”

When it became a hot-button topic on Twitter, the Rangers, in response sent out a team statement to media inquiring that said: “Spirit Day is set aside for MLB clubs to take a stand against bullying – something the Rangers do in a number of ways throughout the year, most notably as one of about a dozen teams to partner with MLB to implement the Shred Hate program. We also have long emphasized anti-bullying messaging at our Texas Rangers MLB Youth Academy.”

We’re proud to support inclusion and take a stand against bullying in all forms, especially actions targeted at LGBTQ youth. #SpiritDay

It missed the point, said Rafael McDonnell, Senior Advocacy, Policy and Communications Manager of Dallas’ Resource Center, which works to empower the LGBTQ community. It was also ironic. While the team’s official messaging does not acknowledge the LGBTQ community, members of the front office and staff have often worked closely with the Resource Center on events. A group of nine employees spent Thursday putting together bags and decorations for a Resource Center-sponsored Halloween event for LBGTQ teens.

“It’s frustrating and it continues to be frustrating,” McDonnell said Friday. “There are clearly people within the team who support the Resource Center and the work we do, but the message to the larger audience keeps getting edited.

“There is something wrong,” he added. “I don’t care who is responsible for what they haven’t taken part in the past, but they need to get over themselves and join up.”

Within the club, there has been more push among employees to be socially aware. A council of employees dedicated to inclusion and community impact was created in 2020 in the aftermath of the murder of George Floyd in Minnesota, which raised issues of racial awareness around the country. The council coordinated the group of volunteers that worked Thursday.

MLB Vice President for Social Responsibility and Inclusion Billy Bean, a former outfielder who was the second ever MLB player to come out as gay, has worked to get more teams on board with acknowledging, accepting and embracing inclusion. He appeared in the Spirit Day video the league disseminated through its social media account Thursday. Some teams retweeted that video. The Rangers’ account did not.

“Where the message is today versus where it was, I am an eternal optimist,” Bean told The San Francisco Chronicle this week. “It’s in everyone’s eyeline, how they’re going to engage. In a perfect world, I would like everyone to meet the bar set by our most progressive teams, but I can’t get too caught up in that. I have to look at how thousands of MLB employees took the time to support my community, in a way that did not exist in the past; that reaches millions of people.”

Bean did not immediately respond to requests for comment Friday.

Meanwhile, there is McDonnell, who is left to speak for a frustrated community. He has long considered himself a Rangers fan and once officed at what was eventually Globe Life Park in Arlington. He attended games at Globe Life Field this season and said he and his boyfriend are one stadium shy of attending games at all 30 current MLB parks.

While he is appreciative of the work and partnership with many in the Rangers’ offices, he finds himself questioning how much longer he can call himself a fan.

“To me, the Rangers are a bunch of scrappy guys who play their hearts out every day and you love that,” he said. “But the more this keeps happening, it becomes more difficult to love something that doesn’t even acknowledge you exist.” 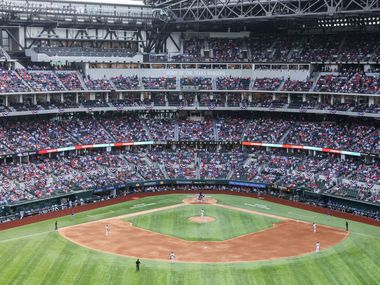