The postgame tension between SMU and TCU, following last Saturday’s Battle for the Iron Skillet, has turned into a controversy between the two Dallas-Fort Worth teams after TCU head coach Gary Patterson spoke to the media on Tuesday.

Patterson, in essence, doubled down on his accusation that an unknown SMU player hit TCU assistant Jerry Kill with a helmet in a postgame scuffle after Saturday’s game, adding that Kill had sustained a concussion. Multiple videos from after the game seem to show Kill being trampled by multiple TCU players in one incident, though Patterson — without video proof — alluded to a second time Kill was hit.

“He had about a two-inch knot on his head and scrapes all over it,” Patterson told reporters about Kill. “I cannot substantiate that it was a SMU or TCU person, but it did happen. And if we didn’t have the flags, it wouldn’t have happened.”

This *appears* to be the point where Jerry Kill is knocked down. This is from the video I took yesterday. You can see a TCU coach in white fall down between the C and the U on the 45-yard line. Doesn’t look like anyone from SMU is around him. pic.twitter.com/0KvKo05gUg

Patterson also accused SMU of scheming to plant the flag after the game. For his reasoning, Patterson pointed to a camera person from SMU’s media team, who was filming near midfield during the scuffle.

“You don’t think it was planned? They had a media person from their office out flipping their flag in the middle of the field? It’s OK, but don’t tell me there wasn’t a plan in there somewhere,” Patterson told reporters Tuesday about the flag planting. “A guy got hurt. That’s why I’m upset about … things like that usually cause seizures.”

Kill, notably, lives with epilepsy. He once retired from being the head coach at Minnesota because of his seizures.

“While Coach Patterson acknowledged that his postgame claim cannot be substantiated, he accused our program, multiple times, of planning to plant our flag on the field following our win. This is a complete fabrication,” Hart’s statement said. “I can state unequivocally that there was no such plan. He points to the presence of members of our creative staff on the field as evidence. We had numerous videographers and photographers on the field during and after the game and they were simply following any number of players and staff to document the win for our ESPN+ series, ‘The Hilltop.’”

The controversy initially started when SMU wide receiver Rashee Rice – the same player who stoked the rivalry fire with comments not only about TCU, but about Fort Worth – grabbed the SMU Triple D flag after Saturday’s 42-34 win and sprinted toward the TCU logo at midfield, looking to plant it in what’s become a common big-game celebration. TCU players and coaches stopped that, but SMU corner Brandon Crossley grabbed the flag minutes later and finished the job, inciting a scuffle. Multiple TCU players broke the flag after it was planted.

For that, SMU head coach Sonny Dykes apologized immediately after the game.

“We don’t want to do something like that,” Dykes said in the postgame press conference. “Look, there’s nobody in the world that has more respect for TCU and Gary Patterson, for how they’ve run this program and the longevity he’s had here -- there’s nobody in the world that has more respect than I do. And so if that happened, it shouldn’t have happened. I feel bad for that. I apologize for that. … I hope [the flag planting] didn’t happen, but if it did, we’ll make sure it doesn’t happen again. Like I said, that’s certainly not out of a lack of respect for TCU. Our players feel the same way I do.”

“I do need to find out who the player is that hit coach Kill with a helmet is,” Patterson told reporters. “I will find that out.”

When asked a follow-up question, Patterson said: “I don’t have any comments on all that. I’m just going to tell you, the word on the street is a player hit a coach. We’ll find out who that is.”

Video taken by The Dallas Morning News and other outlets appears to show Kill being knocked down by his own TCU players.

“I was on the field after the game, along with our coaches and President, and none of us were even aware there had been an attempt to plant the flag at midfield,” Hart said in his statement. “When asked about the flag planting during media availability on Saturday, Coach Dykes took ownership, denounced the behavior and apologized.

“This activity was spontaneous and borne out of emotion. To suggest otherwise is irresponsible and offensive. I will not allow Coach Dykes, our program or our student-athletes to be unjustifiably attacked. Sonny is a tremendous leader and a man of great integrity. There is no better leader of our football program. He and our entire team have my full support.”

SMU and TCU are scheduled to play each of the next four seasons, including next year at SMU’s Ford Stadium. Until then, the smoke from this Saturday’s postgame fireworks will linger. 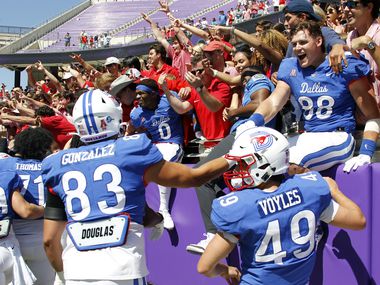 SMU backs up bold claims, runs all over TCU to win Battle for the Iron Skillet