Despite being passed over by the Big 12 once again, SMU athletic director Rick Hart remains focused on what he can control.

UNIVERSITY PARK — If realignment was a choose-your-own-adventure story, SMU might’ve flipped pages, with complete control, and finished the book as a member of the Big 12 Conference.

And how could the Mustangs not want that? The dream for any Group of Five school, ultimately, is to be a member of one of the best college sports conferences because that would elevate their programs, provide a better championship launching pad, and lead to an influx of money. It’s no secret.

But realignment doesn’t work that way.

“In some respects, we tried very hard to focus on the things we could control,” SMU athletic director Rick Hart told The Dallas Morning News Thursday. “Which is what we do every day, and telling our story and continuing to promote SMU and advocate for our coaches and student-athletes, and try to best position our athletic program, and in turn our university.”

On Thursday, the book on SMU’s latest realignment journey closed. Three teams from the American Athletic Conference — Central Florida, Cincinnati and Houston — are heading to the Big 12, possibly as soon as 2023.

SMU, meanwhile, will remain in the AAC with the addition of six Conference USA schools, including Rice, UTSA and UNT.

In the immediate future, this is the lay of the land. But now that the dust is settling, the question arises: Where does SMU go from here?

On Wednesday, a day before the AAC announced its expansion plans, D Magazine published an interview with Big 12 Commissioner Bob Bowlsby. The commissioner was asked specifically about SMU.

In his response, Bowlsby said he had “great respect” for Hart and SMU President R. Gerald Turner, adding that he’s known them for a long time and had many conversations with them.

He then pinpointed Memphis and Boise State as other schools that expressed interest in joining the Big 12.

“And just because we didn’t take them now, that doesn’t mean we are no longer considering growth,” Bowlsby told D Magazine. “It isn’t just about taking in new members just to have more pie. There’s going to have to be good strategic reasons for getting larger.

“It can’t just be about liking the school’s leadership or liking the location. There has to be more to it than that.”

SMU — located about 12 miles from Big 12 headquarters — could be a logical choice if the Big 12 decides to expand again in the near future. But that was the case in the latest round of realignment, too, and the Mustangs were passed over.

As of now, the Big 12 is set to have 12 teams as soon as 2023. The Pac-12 is also set to have 12, while its alliance partners — the Atlantic Coast Conference and the Big Ten — are each set to have 14 members. The SEC might’ve set the future standard with 16 teams.

In short: Realignment could start again, and SMU could be a candidate for not only the Big 12, but other conferences.

That’s the case for other Group of Five teams, as well. One person who knows that well is AAC Commissioner Mike Aresco, but it’s not a concern to him. He said his goal is to make the AAC a great conference and a great home to the schools in it.

“This has been the nature of college athletics, unfortunately, for 40 years. Schools seek opportunity and they seek a better position for themselves, and they should do that. And, unfortunately, it leads to some realignment, and it’s a hard thing.”

In the same answer, Aresco then turned his attention to Cincinnati, a school that’s leaving the AAC and a football team that’s now the No. 2-ranked team in the country.

“We don’t know what’s going to happen — but if they make the [College Football Playoff], or they do something remarkable, they will have done it in the American Athletic Conference,” Aresco said. “I mean, think about that.”

Before the season started, Hart told The News that it didn’t appear a Group of Five school could make the College Football Playoff. History had backed him up.

Ultimately, Hart said his goal at SMU — his vision, as he often calls it — is to establish SMU as “the best overall program.”

That means chasing championships and sustaining relevance, among other things. He believes SMU has made progress in achieving those things, and they are possible to accomplish in the AAC.

“And if we do those things, our student-athlete experience is going to be among the best in the country,” Hart said.

“And so we can’t lose sight of that. Again, we have limited control of the composition of whatever conference we’re in, and realignment — what’s happened in the past and, to a degree, what happens in the future.” 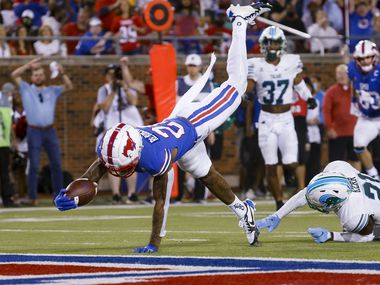