SMU mailbag: How realignment might have impacted head coach Sonny Dykes’ interest in TCU, and more

Also, how the Mustangs’ inconsistent defense can turn things around.

UNIVERSITY PARK – It’s the final week of the college football regular season. On the field, SMU has a chance to win its ninth game of the season – a feat that’s only been accomplished once (2019) since The Death Penalty.

Off the field, changes feel inevitable. According to 247Sports, TCU is “zeroing in” on hiring SMU head coach Sonny Dykes. If that happens, sources told The Dallas Morning News former SMU offensive coordinator Rhett Lashlee, now at Miami (FL), is the clear front-runner to replace Dykes at SMU.

There’s a lot going on, so I figured I’d open up the mailbag from readers and answer some questions. I got a lot of great ones – including some basketball ones that I’ll save for another time – so let’s dive in.

Note: Some questions have been edited for clarity and brevity.

At this point is there anything that can be done about SMU’s defense? Doesn’t seem like we can get pressure on the qb and secondary has been getting burned all year.

Let’s start out with an actual football question. It’s no secret that SMU’s passing defense has been the team’s weak point. SMU is 124th (out of 130) in average passing yards allowed per game. Twice this season SMU has allowed over 400 passing yards, and both of those games – against Houston and Memphis – were losses. Cincinnati looked like it was on pace to do the same before it coasted to an easy win last Saturday.

When the pass rush has been there – like it was against UCF, for example – the passing defense has been good, but the pass rush hasn’t been consistent all year long for a defense that has the 54th most in the country. If that can be consistent the next two weeks, via four-man rushes and blitzes, it’ll clearly help.

Also keep this in mind: SMU’s two starting outside corners are freshman, Bryce McMorris and Jahari Rogers, both of which didn’t start playing corner full time until college. There’s a learning curve that comes with that. The game against UCF was promising, but there’s still more to be learned.

Do we have any hope to hold on to a good head coach for more than a few years as long as we’re in a G5 conference? – Karl R.

Would Sonny have stayed had SMU been invited to the Big 12? – Mike S.

If Dykes leaves will it be because of the TCU program allure or something SMU didn’t do? – Delton S

Great questions. First, let me say that Dykes to TCU isn’t official yet, though it feels inevitable. On that note: I think the course of realignment did have a major effect on Dykes’ interest in other schools. He said, repeatedly, that he enjoyed SMU and wanted to build something on the Hilltop. There were also aspirations to make the program nationally relevant. Not getting into the Big 12, and College Football Playoff expansion being on hold put both of those things into question.

Dykes worked at TCU in 2017. He told 247Sports a year later, when he was at SMU, that he viewed TCU as a top-15 program. The chance to work there may have always interested him, but realignment, I’d imagine, didn’t help keep him at SMU.

It's clear that SMU's P5 goal is joining the Big 12. Why not the ACC? Yes, it would be the westernmost school, but wouldn't expanding the footprint to TX be good for the conference?

Big 12 Commissioner Bob Bowlsby recently told D Magazine that he had great respect for SMU President Gerald Turner and Athletic Director Rick Hart, but “It can’t just be about liking the school’s leadership or location. There has to be more to it than that.”

I think exploring the ACC or Pac-12 would certainly be on the table for SMU in the future, especially considering SMU would offer the two coastal conferences a foot in the door in one of the most fertile recruiting areas in the country.

Is Rhett Lashlee TOO qualified for SMU? We don’t want to be searching for another HC in 2 years if he goes 12-1 twice in the AAC and jumps to whatever P5 shows interest. – Sam

At what point will an SMU coach actually be expected to win something before getting poached? – Matt K.

Going to answer these together. Lashlee, 38, has felt like an up-and-coming head coach prospect for a while. Now he’ll finally get his chance. And if he succeeds – especially early – he’ll undoubtedly garner outside interest. Young offensive-minded head coaches are kind of in these days (thanks, Lincoln Riley).

That success also isn’t contingent solely on conference championships, I think. One of the things that made Dykes so intriguing is the Dallas “born and raised” marketing campaign he’s pushed and the way he’s recruited in D-FW. Add the 2019 season – SMU’s first 10-win year since the Death Penalty – along with undefeated starts each of the last three years, and he makes for a candidate Power Five teams would consider.

Chad Morris was similar. If Lashlee has success at SMU and also recruits the area well, he too will draw similar interest – regardless of a conference title or not.

I think this is an interesting question, especially considering the timing of the coaching carousel this year. It started WAY earlier, because so many jobs were open. SMU is a good case study for it, because its head coach made sense for two early openings – TCU and Texas Tech – while he was also negotiating a possible contract extension at SMU.

One thing that’s for sure: speculation from the outside regarding Dykes’ future has gone on for a month and grown louder with every passing week. Last week he was asked about a possible contract extension and he said he was “finalizing” some details. On Sunday, he talked to his players – without giving a direct answer on what he’ll do after Saturday – about all the rumors.

Dykes answered every time we asked him a question about coaching rumors. He could’ve declined to comment at all, adding that he wouldn’t until after the season, but that wouldn’t have stopped speculation. Like your last question said, I think it’s hard to leave a place “the right way” and the early carousel this year didn’t help.

If you were made the SMU head coach, what would be your first order of business? – X. Swanson

What does Lashlee’s look like, most importantly, who is a likely defensive coordinator candidate? – H. Jimmy

I’ll answer these together. If I was named SMU’s head coach, the first thing I’d do is check-in with current SMU staff members and see who I could possibly retain. Specifically, I’d do everything I could to keep running backs coach and assistant head coach Ra’Shaad Samples. I don’t think it’s too over-the-top to say he’s one of the best recruiters of Dallas-Fort Worth in the country – and other schools, undoubtedly, have noticed.

But let’s say Samples moves on to a Power Five program. And let’s say Rashlee is hired. I think the next thing he’d have to do is find other recruiters with success recruiting Dallas. It’s even more vital now because on Wednesday, SMU lost five of its prized recruits: Garland senior wide receiver Jordan Hudson, Garland safety Chace Biddle, North Mesquite wide receiver Cordale Russell, Grand Prairie senior wide receiver Savion Red and Richland WR CJ Nelson. All five de-committed in the span of an hour.

If I were the next head coach, I’d go after Kansas wide receiver coach Emmett Jones, who has proven to recruit Dallas well. There are others, but I’d make that target No. 1. 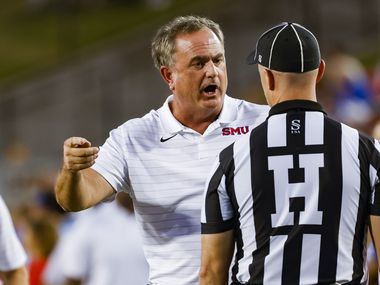