In a Stars season defined by resiliency, it’s only fitting that they would not go silently in an elimination game in the Cup Final.

The Stars weren’t ready for their season to end.

Perry scored the game-winning goal 9:23 into double overtime, keeping the Stars alive in the Stanley Cup Final by lifting Dallas to a 3-2 double-overtime win over Tampa Bay in Game 5 on Saturday night.

The win extended the Stars season for at least two more days, and kept hope alive for the franchise’s second Stanley Cup championship. Dallas now trails the series 3-2 and must win Game 6 on Monday night to force a decisive Game 7 on Wednesday.

The goal was Perry’s second of the game, and came after John Klingberg wired a shot from the blue line. Andrei Vasilevskiy left the puck waiting in the crease for Perry to poke it home. It upheld a brief review to ensure that the play was onside.

In a Stars season defined by resiliency, it’s only fitting that they would not go silently in an elimination game in the Cup Final. A historically poor start couldn’t derail them, and a six-game losing streak in March couldn’t. A coaching change couldn’t. Multi-goal deficits in the playoffs couldn’t. A pandemic couldn’t. The Flames, Avalanche and Golden Knights couldn’t.

If the Lightning are to, they’ll have to wait at least two more days.

“I think we enjoy being called underdogs and every person, really this whole time we’ve been in the bubble, seeming to choose the other team we’re playing,” Seguin said. “We relish that. We believe in each other. We’ve got a confident group, and we don’t want to leave the bubble, so we’re having fun.”

Game 5 was pushed to overtime by a third-period, game-tying goal by Joe Pavelski, the second time in as many nights for the veteran forward. It was pushed to a second OT when the shaft of Khudobin’s stick made a stop on Tyler Johnson in overtime, and when Pavelski and Mattias Janmark both blocked shots, and when Benn missed the net and then passed up a chance to shoot.

“I forget who said it, but that first overtime we had a couple moments,” Pavelski said. “Played a little bit not to win at times, I guess, or just safe. We went out there obviously to win, but were a little safe at times, but talk was just ‘We got good legs. Guys are skating, we’re moving all right, but we need to go at them a little bit.’ So I think we did a little bit better job there in the second overtime.”

Stars interim coach Rick Bowness added: “We didn’t have the right mindset that we normally have going into overtime in the first overtime. You can’t be afraid to lose. We were playing not to lose. We talked about it after that first overtime, ‘We’ve got to play to win. Let’s go at them. Let’s get back on our toes and get skating again.’ We found our legs, we found our second wind.”

In the second overtime, Denis Gurianov had a chance to finish the game on a partial breakaway but flipped his shot high. Khudobin stoned Brayden Point on a deflected shot from Victor Hedman, one of his 39 saves on the night.

Then Perry finished it.

Pavelski forced overtime with 6:45 left in the third period, negating Mikhail Sergachev’s potential game-winner 3:38 into the frame. It was Pavelski’s 13th goal of the playoffs, fourth of the Final and another in the long line of clutch goals for the jewel of last summer’s free agent class.

Perry scored the game’s first goal as the first period wound down, picking up a loose puck in the slot, roofing a shot past Vasilevskiy and banking off the post and in. It was Perry’s second goal in as many games, and was the result of many of his teammates' work.

Joel Hanley fought off Tyler Johnson in the neutral zone to get the puck deep, Klingberg and Jamie Oleksiak kept it in at the blue line. Alexander Radulov and Seguin moved the play along, and Joel Kiviranta’s board play freed the puck. Then Perry finished.

The Lightning answered with a strong move from Ondrej Palat in the second period, cutting across the crease before finishing on his forehand past Khudobin. On the play, Nick Caamano lost Palat in the neutral zone, forcing Esa Lindell to cover for him. After Palat blew past Lindell, neither Khudobin nor Miro Heiskanen used their sticks to dispossess Palat.

The Stars had a prime opportunity to score the game when Erik Cernak’s high-sticking penalty put Dallas on the power play with 8:54 left in the third period. But Dallas struggled to get set up on the man advantage, and a ruined power play chance fit right in with the rest of the series for the Stars.

The Stars entered Saturday’s game less than a day after losing an overtime heartbreaker in Game 4, when Kevin Shattenkirk’s goal game Tampa Bay a 3-1 lead and forced Dallas to face its second elimination game of the postseason.

Before Game 5, Stars interim coach Rick Bowness talked about his team’s spirit, both on a macro scale — overcoming a slow start and bad finish with a coaching change in between — and a micro one — the Stars came back to win eight games in the playoffs.

“Our guys have been resilient all year,” Bowness said. “We’ve been a team that’s been able to bounce back from bad losses. Fight back in the third period to overcome two, three-goal losses. This is a resilient group, and I have full faith in this group. I have full faith that that game from last night is behind us.” 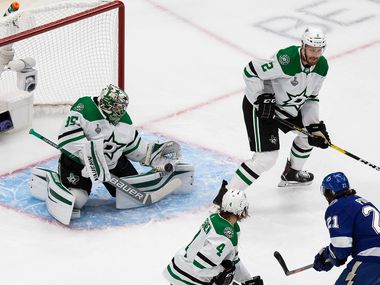 Facing their toughest challenge on short rest, Anton Khudobin came through for Stars once again