FRISCO — What a difference a year makes for Riley Damiani.

At this time last season, Damiani was an early cut in Stars training camp entering his first professional season. He was an exciting project to monitor, but wasn’t counted on to contribute at the NHL level.

Now, after an AHL Rookie of the Year season with Texas, Damiani is one of the team’s top prospects, and a serious threat to make his NHL debut with Dallas. His next steps to the NHL will be taken next week at the Traverse City prospect tournament.

“I think I can play in any role that they want me to,” Damiani said. “I can adjust my game any which way. Whether it’s a bottom-six role, or a top-six forward, power play, penalty kill, I think I can adjust to anything that they’re looking for.”

Damiani, a natural center who was a fifth-round draft pick in 2018, played right wing in the first two practices of development camp, and will kill penalties next week in Michigan. It’s all part of the organization’s plan to find playing time for Damiani in Dallas.

The Stars have plenty of centers that can play in the NHL. Roope Hintz, Joe Pavelski, Tyler Seguin, Jamie Benn, Radek Faksa and Luke Glendening can all play center. So can Ty Dellandrea, who played both center and right wing. So if Damiani is going to force his way into the NHL this season, it could come at wing.

On Saturday, Damiani was on Oskar Bäck’s right wing with Francesco Arcuri on the other side. On Sunday, Damiani was centered by Dellandrea with Jacob Peterson at left wing.

Texas coach Neil Graham said Traverse City “is a perfect time to try” Damiani at wing, and added that it does not mean Damiani will play exclusively wing. What’s the biggest adjustment Damiani will have to make on the wing?

“I’d say probably wall play, especially being a little smaller in stature,” Graham said. “He can excel in that area, it’s just about getting the reps, picking pucks off the wall, making plays off the wall, understanding when you may have to get a puck out and when you have time to make a play.

“That’s all repetition. He’s a smart, cerebral player who I have no doubt will do well with those things. But it’s all about doing it and getting the touches at it.”

Damiani said J.J. McQueen and Rich Peverley, who run the Stars’ prospect development, told him over the summer there was a possibility he would be at wing in the fall.

“I’m not a big guy, but I’ve been working a lot on it in the summer,” Damiani said. “I knew there was a chance I would be on the wing coming in here. I prepared for it, I’m ready for it and I’m looking forward to it.”

Damiani was an offensive force in the AHL last year, as his 36 points led all rookies and tied for third-most points in the AHL last season. He was relied on to be one of Texas’ best players, on the top power play unit and on the top line. Graham held him off the penalty kill to limit his minutes as a rookie, but that will change this season, beginning in Traverse City.

“He’s so smart,” Graham said. “He could have penalty killed for us all year in Texas. He was one of our best players and we needed him to produce every night, so it was more about managing the workload than anything.”

Damiani is still more likely to start the season in the AHL given the contracts the Stars have up front, but he will assuredly be one of the team’s first call-up options should injuries arise.

“I know I’m here for a reason,” Damiani said. “I know I can keep building, keep getting better while I’m here, and use the resources here to do that. As long as I got some confidence, and I’m upbeat and I’m happy, it’s a game of hockey. Might as well have fun with it, do the best you can.”

Impressing early: Across the first two days of development camp, the Stars have only scrimmaged for about 10 minutes at 5 on 5, in addition to some special teams on Sunday afternoon.

Even with the limited amount of competitive action, there has been a standout early on: defenseman Artem Grushnikov. At 6-2 and 174 pounds, Grushnikov was creative with the puck and impressive skating out of his own end.

“I thought Grushnikov looked very solid and turned some heads,” Graham said. “It’s his first time here, English is his second language, so that’s a lot to absorb, and he’s done a great job. Gritty in the opportunities to stick your nose in there. I thought he skated well and made some plays, so I’ve been really impressed with some of the stuff he’s done.”

Grushnikov was a second-round pick this summer and should play in OHL Hamilton this season. 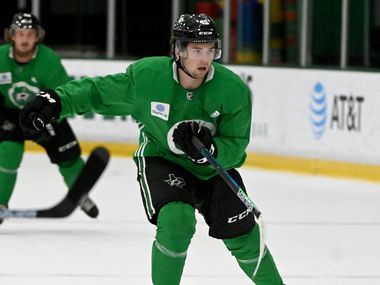