Graham is the AHL’s second-youngest head coach, and is currently coaching Stars prospects in the Traverse City prospect tournament.

When you mention to Neil Graham that he’s about to enter his third season as a member of the Texas Stars coaching staff, it can be tough to believe.

The first two seasons have been whirlwinds for the AHL affiliate in Cedar Park. Graham was hired to be an assistant coach, but he was elevated to head coach just two months into the season as a result of Jim Montgomery’s firing in Dallas.

The 2019-20 season was cut short because of the pandemic, and the 2020-21 season was limited to 38 games. So some of this season will be new for Graham, going through a complete AHL schedule for the first time since joining Texas.

“It’s weird that we haven’t had a full year and we’re already in Year 3,” Graham said. “But then there’s other times it feels like I’ve been here five years when you’re at home for 10 months during a pandemic. That feels like a couple years in itself.”

Graham, 36, is the second-youngest head coach in the AHL, and the coach of the Stars’ prospects during the Traverse City prospect tournament, in which the Stars are 0-2 going into Sunday’s game vs. Toronto. He ran his first development camp last week and will oversee an overhauled staff that includes two new assistants in Texas.

He will look after the development of prospects such as Thomas Harley, Riley Damiani, Ty Dellandrea and Jake Oettinger, should all four end up in the AHL following training camp.

“His communication skills are outstanding,” Stars assistant general manager and Texas GM Scott White said. “He’s a younger man, and I think he’s just got a good way of connecting with the guys. He commands the room when he needs to command the room, but he also has that human side to him as well. There is a blend of where you need to be in that area, and he has it.”

Graham knows the Stars organization very well at this point.

He finished his playing career in 2012-13 as a player-coach for ECHL affiliate Idaho before joining the coaching staff full time the following season. In 2015-16, he took over the head coaching job in Idaho, which he held for four years before joining Texas.

“Very positive and respectful both ways, from my perspective and from a player’s perspective,” White said. “I just had a good feeling [making him the Texas head coach]. His work ethic is good. It’s hard work to work in the Double-A level of hockey, and I knew he had that blend of ability. He’s continuing to do that at the American League level.”

In Texas, Graham runs the same systems that Rick Bowness does in Dallas to ensure that players are familiar with them by the time they are called up to the NHL. Of course, there are tweaks to be made when there are different personnel on each team.

So what are his main points of emphasis?

“Play with speed, make plays moving our feet. In order to do that, you have to defend fast,” Graham said. “The longer you spend defending, it’s a drain on energy, so you want to do it efficiently. Defend quickly, and then use that energy to transition to offense.”

Graham should have a decent team in Texas. In addition to high-end prospects such as Harley, Damiani, Dellandrea and Oettinger, Texas will go eight deep on defense after the offseason signings of Alexander Petrovic and Andreas Borgman. They could get Tanner Kero, Nick Caamano, Rhett Gardner and Joel L’Esperance back after they spent last season on the Dallas taxi squad.

Might Graham have a future behind an NHL bench?

“I think he’s trending properly,” White said. “He’s just a good coach. His trajectory will continue to move along. Does he have the ability to coach in the NHL? With some added experience, I believe he does.” 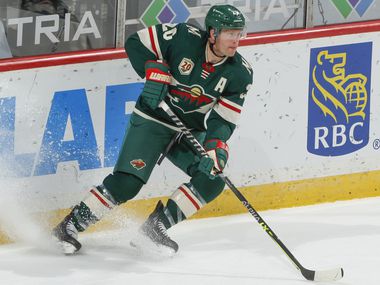 ‘Just a very, very smart player’: Breaking down what Ryan Suter will bring to the Dallas Stars