Heiskanen signed a massive eight-year, $67.6 million extension in the summer.

FRISCO — Miro Heiskanen won’t have to worry about the business side of hockey for quite some time. Now, the hope is that Heiskanen evolves into a true Norris Trophy contender.

Heiskanen is entering his fourth season in the NHL, and does so after signing a massive eight-year, $67.6 million extension in the summer. The extension will keep Heiskanen in Dallas through the 2028-29 season, and funded Heiskanen’s purchase of his new white Range Rover in Finland.

“I wanted to be part of the Stars, and now I can be part for a long time, so of course it’s a great feeling,” Heiskanen said. “I didn’t have to think about that too much anymore. It’s nice to be here for a long time. Love the city, love the organization. It’s great.”

Back in Dallas, the expectations are again high for the 22-year-old with the third-highest cap hit on the team.

“If we can keep everyone healthy, I’m confident in Miro taking another step this year,” Stars coach Rick Bowness said. “It’s there. The package is there. He’s had three years now.

“Now he’s felt making the playoffs and going to the Final, and the pain that comes with missing the playoffs. Sometimes, that helps you grow. It does because you don’t want to experience that again.”

Heiskanen opened camp paired with fellow Finn Esa Lindell, a change that’s a result of Jamie Oleksiak going to Seattle in the expansion draft and the addition of Ryan Suter to play alongside John Klingberg. Heiskanen primarily played with Oleksiak since the start of the 2020 playoffs, but Heiskanen thinks a partnership with Lindell could benefit him offensively.

“Esa is probably a little more defensive than what Rig was, so it kind of probably can help me a little bit more,” Heiskanen said. “You have to defend first and then jump into the offense.”

Heiskanen had a down year offensively last year, posting 27 points in 55 games. During the 2020 playoffs, he had 26 points in 27 games.

Part of the downturn was Heiskanen’s 17-game goalless streak to start the season. Another part was his usage at even-strength alongside the Stars’ checking line. Plus, when the Stars were without Tyler Seguin and Alexander Radulov, goals were harder to come by, and therefore Heiskanen’s assists totals dipped.

With Heiskanen leading the charge, the Stars have one of the deepest blue lines in the NHL, and Bowness asks a lot of his defensemen. They are tasked with shutting down opponents, breaking out of their own zone, joining the rush and activating in the offensive zone.

Adding more offense to his game seems to be the next step for Heiskanen, whose skating, stickwork and hockey intelligence already makes him a superb defender. He said he could shoot more and try to find more open ice this season.

“I want to create a little more than what I did last regular season,” Heiskanen said. “I want to score some goals, I think I had lots of opportunities, but I didn’t score. I want to be more creative and effective than what I was last year.”

Lost in translation: The Stars made a subtle tweak on Friday, having defensemen Joel Hanley and Artem Grushnikov switch practice groups, so Alexander Radulov could translate English instruction to Russian for Grushnikov to understand.

“Arty doesn’t speak English very good. I needed a Russian to translate for him, so I had Rads doing the translating,” Bowness said. “So good luck on that one. That’s the only reason. 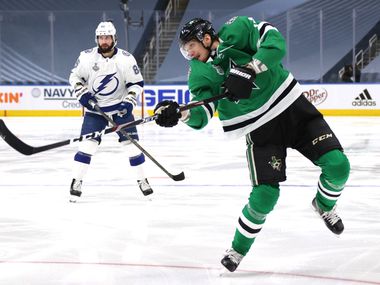 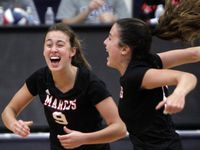