Dallas was one win shy of setting a new franchise record with eight consecutive victories.

A wild 5-4 loss to the Golden Knights on Wednesday night snapped the Stars’ seven-game win streak, leaving them one win shy of setting a new franchise record with eight consecutive victories. Vegas scored three goals in a six-minute stretch of the third period to erase a two-goal Dallas lead and hand the Stars their first loss in almost three weeks.

After Mark Stone tied the game with his second goal of the night with 5:13 left in the third period, Max Pacioretty won the game for Vegas 67 seconds later when he put a loose puck at the side of the net past Braden Holtby.

Joe Pavelski scored twice for the Stars, who also got goals from Tyler Seguin and Jason Robertson. Holtby made 39 saves on Wednesday night, including 20 in a second period in which the Stars were outshot 22-7.

“That was one of those games, obviously, they deserved to win,” Holtby said. “Those are the games that good teams can find a way. For us, it was a bounce here and a couple goals. It’s not like it’s a panic. That’s a good team over there, and when you play teams like that, it’s cat and mouse.”

The Stars missed their chance at history Wednesday night. They carried a seven-game win streak into T-Mobile Arena, a win streak that the franchise has accomplished five times before. But never has a Stars team hit eight.

Wednesday night asked the Stars to step out of their comfort zone in order to set the record.

Instead of the tight, checking, low-scoring games that the Stars would prefer, Wednesday night was an offensive showcase. Stars coach Rick Bowness knew it could be this way, but also understood that this style of play would not suit his team. When he was asked Wednesday morning if the game could be a track meet, he responded: “We hope not.”

But the teams combined for nine goals. The 76 total shots on goal were the most in a Dallas game this season. Vegas had 76 shot attempts, and dominated 5-on-5 possession, owning 65% of the games shots, scoring chances and expected goals, according to Natural Stat Trick.

“Not nearly good enough,” Bowness said of the Stars’ 5-on-5 play. “Specialty teams were obviously huge. Goaltending was great. Five on five, we just didn’t have the energy that we normally play with, it’s as simple as that.”

Pavelski: “I think the first two periods, a lot of it was we didn’t come through the neutral zone very clean. They’re a team that if you give them two-thirds ice, they’ve got a great transition game and they take off. You saw they just go at times, and they make some plays. … There was areas that we’re usually pretty good at that we weren’t good enough.”

Still, it looked as if the Stars might leave Sin City with two points when Pavelski scored to give Dallas a two-goal lead with 11:04 left in the third period.

It even looked like Seguin might give the Stars a three-goal lead when he was presented a yawning cage. But his shot went wide, and Michael Amadio scored less than a minute later.

“It was just a quick play,” Seguin said. “I think it was maybe skate to stick and just put it on net, and it went right through the crease. Had another chance there on my last shift. I think I just missed glove. Sucks, definitely want to bury those, but nice to get some looks again.”

With a win on Wednesday, the Stars might have completed their victory Bingo card for number of different ways to win.

Win a high-scoring game in one of the loudest buildings in the league? Nope.

The Stars are now 1-8-2 when allowing at least two goals in a game. It was their first loss of the season when scoring at least four goals.

“We’ve had a good stretch, winning games, playing a lot of good hockey,” Pavelski said. “So we’ve got to understand that and get back to the commitment right away tomorrow.”

Bowness: “That’s not our game, we’ve got to get back to playing our game tomorrow night.” 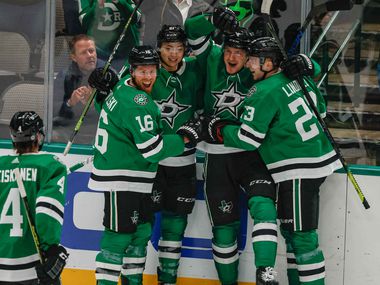