The 2015 draft pick paid his dues and toiled in the minors before earning the eight-year extension he signed on Tuesday.

FRISCO — When the Stars look at Roope Hintz, they see a model: not only of a well-designed hockey player, but also of a steady but not rushed career arc.

Hintz, who signed an eight-year contract extension on Tuesday morning worth $8.45 million annually, has grown into the team’s top center and a point-per-game producer. Originally a 2015 second-round pick, Hintz took a longer path to NHL stardom, something that Stars coach Pete DeBoer admires.

“You like to see guys like that rewarded,” DeBoer said after practice on Wednesday. “He wasn’t a top-five pick, spent time in the minors, turned himself, worked himself into being an elite player in the league and gets rewarded for that. Those are the stories you like to see, and it’s a lot of money. But well deserved.”

Hintz enters Thursday’s game against the Ducks with eight goals and 16 assists. Since the start of the shortened 2020-21 season, Hintz has 139 points in 143 games.

In 2018-19, he was sent down to the AHL three different times as he tried to break into the NHL. In 2017-18, he spent his entire first season in North America with Texas in the AHL. It took Hintz time to make it to the NHL. It took longer for him to solidify himself as a two-way force and one of the best players in the league.

“Of course, it takes hard work to get here, but the work hasn’t stopped now,” Hintz said. “It’s nice to see when you work hard, you get rewarded. Now, you just have to keep working and try to get better.”

Stars general manager Jim Nill and his front office should be pleased with Hintz’s career path. They allowed him time in the AHL to adjust to North America, play offensive minutes and generate confidence. When he didn’t produce immediately in the NHL, they didn’t force him to remain in Dallas.

Now, they’ve home grown a No. 1 center to go along with a homegrown No. 1 goaltender (Jake Oettinger), No. 1 defenseman (Miro Heiskanen) and No. 1 winger (Jason Robertson).

“There’s a long list of guys who didn’t take the long way like that, that rushed in or weren’t ready or were forced in that haven’t had those careers,” DeBoer said. “He’s done it right the whole way, and the organization’s done right by him the whole way.”

Hintz’s contract is worth $67.6 million in total, tying Heiskanen’s eight-year deal for the third-biggest in Stars history. It is also tied with Heiskanen for the second-biggest in NHL history for a Finnish-born player, behind only Aleksander Barkov’s $80 million contract.

Hanley still in: Stars defenseman Joel Hanley will remain in the Stars lineup against Anaheim on Thursday night after entering against St. Louis on Monday. Hanley had his first career NHL fight against Blues forward Nathan Walker, and played a season-high 14:26.

“He has to stay in,” DeBoer said. “You can’t play a game like that and not get to play again.”

It was Hanley’s first fight since a 2014 rookie tournament when he was in the Arizona organization. He said that his last fight before that was in junior hockey, when he broke his leg after the fight falling to the ice.

While Hanley remains in, Nils Lundkvist appears to again be the odd-man out. His scratch on Monday was his first of the season with Dallas.

“There’s nothing wrong with a reset,” DeBoer said. “That doesn’t mean you’re going through what he went through with the Rangers last year, where you’re in the minors and not going to get an opportunity again. This is a totally different situation. I think it’s just a reset for him.”

— Goaltender Jake Oettinger was back on the ice for practice Wednesday after he missed Monday’s game in St. Louis with an illness.

Matthew DeFranks. Matt began covering the Stars for SportsDay in 2018-19, and previously covered the Florida Panthers for the South Florida Sun-Sentinel. He's also covered college football, the Miami Marlins, the Kansas City Royals and the Los Angeles Angels for a variety of outlets. He graduated from the University of Notre Dame. 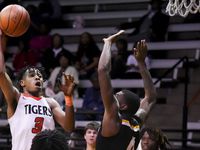 Be the smartest Stars fan. Get the latest news.

Biden touts resilience after pandemic and Jan. 6 riot in State of the Union