In what was supposed to be a breakout season, Tom Herman’s walking a thin line between solidarity and tradition

In regards to “The Eyes of Texas,” Herman can’t control his own players.

In the image gone viral, a dozen or so figures linger on the Cotton Bowl grass after Texas' five-hour, four-overtime 53-45 loss to Oklahoma. A few uplifted hands provide the narrative. You can almost hear the brassy blast of “The Eyes of Texas” booming over their heads like a fighter-wing flyover.

A cameraman, coaches, a few support personnel, a couple of suits.

If a picture can paint a thousand words, this one is worth millions. As in dollars, the stuff that keeps college athletic programs afloat.

Texas fans and boosters aren’t just mad that the Longhorns couldn’t even beat an Oklahoma team coming off losses to the likes of Kansas State and Iowa State, they’re livid that the only Longhorn who made a game of it seemingly was the only one who hung around to pay his respects. The way they see it, it’s bad enough that Tom Herman’s supposedly breakthrough season already looks broken; even worse when he can’t control his own players.

Here’s where it gets complicated: Angry boosters sometimes threaten to withhold their checks, which makes athletic directors nervous, especially in a time when the pandemic has already drained millions in revenues. The potential shifting of the foundation beneath the world’s most lucrative college athletic program explains why Chris Del Conte ultimately caved in.

Now, by the athletic director’s edict, all players must stay and stand for “The Eyes of Texas” no matter how offensive they may find it, because doing so will pay the bills.

Unless you count losing to OU, which is the usual source of any frustrations on the Forty Acres, the problems started with summer protests of racial injustice on campus, “The Eyes of Texas” included. As you probably know by now, Texas' school song, born in a minstrel show, was delivered by black-faced performers. A few athletes asked that the song be shelved and replaced by something less offensive. University officials acquiesced on most other requests, but the song remained.

As a concession to the players, though, they didn’t have to hang around if they didn’t want to. Which seemed to work just fine until absent fans got a look at Ehlinger all by his lonesome, a powerful image at that.

Next thing you know, Herman’s leading his Monday news conference by reading a prepared statement. In it, the former wide receiver reversed field a couple times, asking staff and players to accompany him in “The Eyes of Texas,” but only if they’re “comfortable doing that.” Then he said it sure would be great to thank fans and observe tradition, but he understands the concerns of some in the program, wrapping up with, “I respect that as well.”

If it wasn’t exactly Teddy Roosevelt rallying the boys up San Juan Hill, TR never had to butt heads with Lincoln Riley in an 18-year-old’s living room.

No college football coach over the last 50 years could risk appearing insensitive, much less racist, but it’s particularly true now. I don’t mean to imply that they weren’t sincere, but it was in coaches' best interests to march in lockstep with protesters this summer.

Except in the case of Herman, walking a thin line between solidarity and tradition that has all but vanished.

What’s wrong with Texas' school song? Nothing, except for its origins. I’ve heard a few fans snort that most protesters probably never knew the history until recently and, therefore, weren’t any worse off because of it. Sure. And if that sort of premise held any water, we wouldn’t have divorce lawyers.

Pardon the moralizing, but, just because you may not be offended by something doesn’t mean others don’t have a right to be. Texas players have the same right this week as they did last week and the week before.

Only now the athletic director has effectively painted his coach into a corner. Besides beating Baylor and trying to salvage a season gone sideways, an overwhelmed Herman must worry if his players will circle up and play to the crowd every week.

If I were Del Conte, here’s what I’d do instead: Tell all those angry boosters to put up enough money to buy out Herman’s contract, which comes to $15.4 million, according to USA Today, then talk Urban Meyer out of retirement. Meyer and Nick Saban are the only college coaches alive with the ego, skins and gravitas to survive at Texas. Meyer would win big, just as he has everywhere else. The donations pouring in would swamp Mack Brown’s old revenue streams. Texas wouldn’t just be back, it could secede from the union.

And Del Conte could let athletes exercise their consciences and never worry about a call from a cranky booster again.

One other thing: Yes, I’m aware that Earl Campbell doesn’t understand all the fuss over the school song, but even the greatest Longhorn of them all doesn’t speak for everyone. Just as Sam Ehlinger, God bless him, spoke only for himself after Saturday’s loss. For that matter, his teammates made a statement, too. 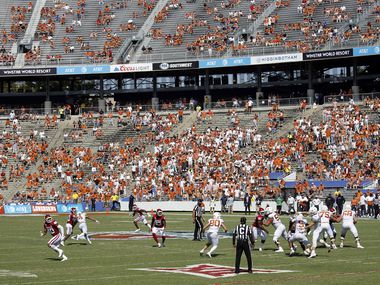