Herman wants players to respect the fans during the “Eyes of Texas,” but there’s no mandate to remain on the field afterward.

Texas football coach Tom Herman tried to thread a verbal needle Monday, dealing with “The Eyes of Texas” controversy that has taken on a life of its own.

Yes, he wants players to respect the fans during “The Eyes of Texas,” although there’s no mandate to remain on the field afterward.

On one side of the controversy is athletic director Chris Del Conte, who told the team last week that his expectations were that players would remain after the game and stand during the traditional singing of “The Eyes.”

On the other are the players, many of whom have significant concerns about the school song they view as distasteful or worse, and its roots in minstrel shows and blackface performers. An edict from the administration is likely to result in plenty of blowback.

In between is Herman, dealing with a two-game losing streak in his fourth season, heading into Saturday’s game with Baylor (1-1), which just restarted practice from a COVID-19 pause. Watching are some agitated fans, alums and donors — if you believe message board traffic — who were less-than-happy with the pictures of Sam Ehlinger and a few coaches staying on the field at the Cotton Bowl after the four-overtime loss to Oklahoma.

Sounds like a challenge, one that might not be there if Texas were 4-0 instead of 2-2 with Big 12 leaders Oklahoma State, Iowa State and Kansas State remaining on the schedule.

“I don’t think anything’s impossible,” Herman said when asked about finding a middle ground. “Nobody from Chris Del Conte to myself has mandated our players do anything. ... And so I think mandate is a very strong word. That’s never been a word that’s been used to us as coaches from our administration, nor from us coaches to our players.”

It was a good try from the standpoint of semantics during a 50-minute Monday news conference, about 20 minutes longer than Herman standards.

Will it be enough for the postgame at Royal-Memorial Stadium after Baylor, win or lose? What if just half the team stays — or less, with a mass exodus to the locker room?

Herman characterized his team as having a unified locker room where players speak their mind and no grudges are held.

“I think the general pulse of the team, is that we’re in as good a place as we’ve ever been right now as a team,” Herman said.

At the same time, he admitted that there is no real consensus to be found.

“This is so individual,” Herman said. "If you line 10 guys up in a locker room, you might get nine or 10 different opinions on what we should do, what the song means, what the fans mean, what the university means.

“Handling that encouragement with the utmost sensitivity, I think is, is topic No. 1 for me.”

Runner-up is beating a Baylor team that is only playing its third game, and missed 11/2 weeks of practice.

Herman is preaching progress, especially on the defensive end under new coordinator Chris Ash. The Longhorns are seventh in total defense and eighth in scoring defense in the Big 12, although the stats are skewed by a small sample size and two overtime games.

The rushing game is more stops than starts besides Ehlinger, a scenario that Texas has sought to change. The offensive line has looked average. Don’t ask about special teams.

Rest assured, a lot of eyes will be on the Texas performance against Baylor — and afterward. 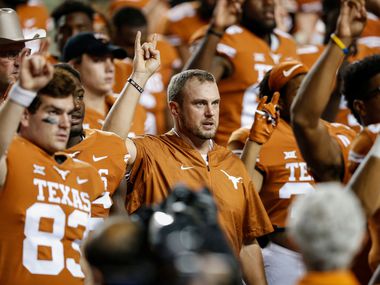