Large corporate office campuses are KDC’s specialty, and the land is at the high-profile corner of the tollway and S.H. 121.

One of the last development sites in Plano’s $3 billion Legacy West has quietly changed hands.

The 10-acre block is near the southwest corner of the Dallas North Tollway and State Highway 121, north of Liberty Mutual Insurance’s high-rise campus.

The property has been owned by the partnership that started in 2014 to develop the 250 acres surrounding J.C. Penney’s old headquarters campus in West Plano.

Since then, partners Karahan Cos., Columbus Realty and developer KDC have built what’s considered the most successful mixed-use development in North Texas, if not the entire state.

“We absolutely see it — similar to the rest of Legacy West — as a great potential corporate location,” said KDC president Toby Grove.

Large corporate office campuses are KDC’s specialty. And property brokers expect the developer will be pitching the Plano property to businesses looking for new digs in Dallas’ northern suburbs.

The just-sold building site is across the street from where tax consulting firm Ryan LLC recently announced it will build a 24-story office tower. Construction is set to start on the 400,000-square-foot building in the first quarter of 2022.

And global financial adviser Vanguard plans to open a large office next door in one of Liberty Mutual’s towers.

Karahan Cos. and Columbus Realty still have about 2 acres left to build on in Legacy West. 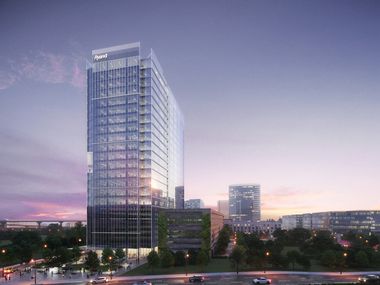