BALTIMORE — With apologies to the great Texas troubadour, Robert Earl Keen, the road has gone on forever for the Rangers. Only the losing never seems to end.

The Rangers did actually win Sunday, finishing off the road schedule with a 7-4 win over dreadful Baltimore. It forestalled a 100th loss for another day. Well, at least two, since the Rangers don’t play again until Tuesday when they start the season’s final homestand in Arlington.

The Rangers finished the road season at 24-57 (.296), the second-most losses in 50 seasons in Texas. The season included the two longest road losing streaks in Rangers history, 16 games from May to mid-June, and 14 games from July 4-August 10. It was a lot. But it goes on beyond that.

Over the last three years, as the roster has skewed younger and younger, playing on the road has become a bigger obstacle for the Rangers. They are 63-129 (.328) as the visitor in Chris Woodward’s three years as manager. It is the worst road record in the majors.

“It is what it is,” Woodward said of the Rangers’ road struggles. “There are a lot of little things that we didn’t do well on the road. We had some really, really tough road trips. We had a decent one before this one. We’ve just got to play better.”

First about the win: Willie Calhoun, who has hit five balls at 100 mph or harder over the last two days, had a two-run triple in the eighth to salt away the win. Andy Ibáñez had given the Rangers the lead in the second with a homer.

But these days even wins come with some consequences, though in this case it’s more confirmation than causation. Their elimination for first-pick draft eligibility became official Sunday. They can’t lose enough to catch Baltimore or Arizona for the worst record and the top draft pick, and can’t draft better than third. The Rangers’ 57th win Sunday was Baltimore’s 106th loss. The most the Rangers can lose is 105 – and that’s if they get swept on the season-ending homestand.

Enough about history. The Rangers are already in future mode. They intend to add some veteran talent to a club that had the fourth youngest roster (26.8 years on average) in the majors. The roster has gotten younger and younger as the team inched towards a full-scale commitment to rebuilding. It was the fifth-oldest roster in the majors in Woodward’s first year and the eighth-youngest last year.

Winning on the road is often about maintaining routines and that’s a place where veterans can make a difference.

“I think the road is all about competing and playing the game because we obviously don’t have 35,000 people wearing our colors,” said first baseman Nathaniel Lowe, who is in his first full season and led the team in road OPS (.810 entering Sunday). “As a unit need to be better as far as just playing the game and doing what the game is asking us to do instead of trying to change our game for different stadiums that we play in. It’s no secret the ball is not afraid to jump out of the yard [in Baltimore], and it will get hung up sometimes at home. We need to not change what we do.”

The youth was particularly noticeable in the starting rotation. On the road, Rangers’ starters allowed 3.71 free bases on walks and hit batters per nine innings; at home it is 3.08. The Rangers starters coupled that by allowing significantly more homers per nine innings on the road (2.01) compared with at Globe Life Field (1.50). As a result: The Rangers allowed almost a run per game more on the road than at home.

The walks-plus-homers issue was a big reason Dane Dunning didn’t get a chance to earn his first road win of the season Sunday. Though he allowed only one hit, he issued five walks and a hit batter. The one hit: a homer by Anthony Santander immediately after he walked Austin Hays in the fourth. When Dunning walked leadoff man Ryan McKenna with two outs in the fifth, pushing his pitch count past 70, Woodward removed him.

The road issue can’t be more stark with any pitcher other than Dunning. In 12 starts at home, he’s 5-2 with a 2.67 ERA. On the road: winless in seven decisions with a 6.39 ERA. He’s allowed nine homers on the road to just four at Globe Life Field.

“I take each outing the same, I feel like,” Dunning said. “Maybe the game speeds up for me a little bit, and maybe that has been a problem. I try to be as efficient as I can be, and I just haven’t been on the road.”

Woodward said, “I don’t feel like there were any deer-in-the-headlight moments where we were intimidated by the road or the fans. I just don’t think we executed very well. We just need to play better.”

That way, maybe next year, the party can finally get started. 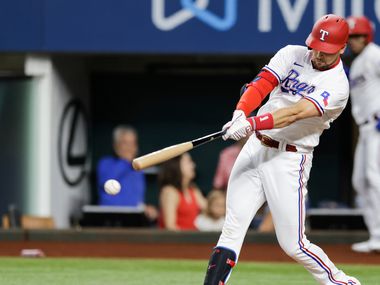 Have Rangers determined which young players can contribute in future? Yes... and no